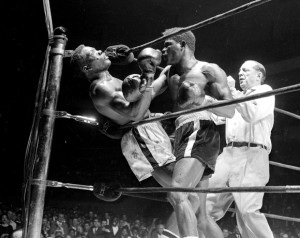 UNITED STATES – MARCH 24: Emile Griffith vs Benny Paret, Benny “Kid” Paret lies helpless against ropes as flailing fists of Emile Gfriffith batter him into unconsciousness during twelfth round of their welterweight championship fight at the Garden . Ref Ruby Goldstein pulled Griffith off the champ who slumped to the canvas. It was ruled a TKO at 2:09 of the twelfth. paret was removed, still unconscous, to Roosevelt Hospital after getting last rites in dressing room. (Photo by Charles Hoff/NY Daily News Archive via Getty Images)

By HEIDI WEISS/SPECIAL TO THE V.I. FREE PRESS

Something brand new. Something ancient Greek. Something African American. Something British. And an old chestnut just for fun. That’s the mix for Court Theatre’s 2016-17 season.

Here’s a closer look at the lineup:
“Man in the Ring,” a world premiere by Michael Cristofer, directed by Charles Newell (Sept. 15-Oct. 16): Based on the true story of six-time world champion boxer Emile Griffith, the play charts Emile’s humble beginnings in St. Thomas to his infamous match against his arch-rival Benny “Kid” Paret.

When Benny questions Emile’s sexual preferences, Griffith responds in the ring and leaves a mark that lingers long after their legendary encounter. (Cristofer received the Pulitzer Prize for Drama and the Tony Award for Best Play for “The Shadow Box” in 1977). The show will feature Kamal Angelo Bolden.

Emile Alphonse Griffith (February 3, 1938 – July 23, 2013) was a professional boxer from Charlotte Amalie who became a world champion in the welterweight and middleweight classes.

His best known contest was a 1962 title match with Benny Paret. At the weigh in, Paret infuriated Griffith, a bisexual man, by touching his buttocks and making homophobic remarks.