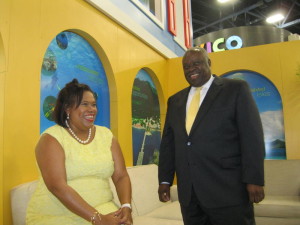 MIAMI — The United States Virgin Islands Department of Tourism is reporting an insightful mission to Miami and Fort Lauderdale earlier this month, including the territory’s participation at Seatrade Global 2016.

Beverly Nicholson-Doty, the USVI’s tourism commissioner, reported strong interest in the Ports of the Virgin Islands from dozens of cruise line executives as well as a renewed curiosity in the destination’s offerings.

Nicholson-Doty, who accompanied Gov. Kenneth Mapp to talks with a number of cruise line executives and industry experts, explored today’s competitive landscape, including challenges and opportunities for improvements, such as the importance of new water transportation options and elevating the cruise passenger experience, including Main Street on St. Thomas.

According to Nicholson-Doty, meetings with cruise partners Carnival Corporation and Royal Caribbean International resulted in the reaffirmation of long term agreements with the West Indian Company (WICO) and the Virgin Islands Port Authority (VIPA) aimed at strengthening year-round cruise calls to the Territory, including the island of St. Croix.

For the second consecutive year, unique Virgin Islands products were on display at the global cruise industry event, showcasing the artistic and creative talent of the territory’s entrepreneurs. “Our goal is to promote our entrepreneurs, establish new markets for these products, and encourage the lines to offer them for sale on the various ships which ply our waters,” Nicholson-Doty said.

Mapp told the Miami Herald that the government has launched several initiatives in the territory since becoming governor 14 months ago. Among them: promoting technology and manufacturing investments from the U.S. mainland and elsewhere around the globe.

The governor said that he’s also promoting improvements in the port in St. Thomas to keep the lucrative cruise business coming, while trying to build more hotels in the territory.

But getting USVI’s 100,000 citizens healthier while helping local farmers is a priority.

Caribbean nations in general have among the highest prevalence of chronic noncommunicable diseases in the Americas, according to the Caribbean Community regional bloc known as CARICOM. The bloc has called on nations to push wellness, noting that diabetes mortality in some Caribbean countries is 600 percent higher than in the mainland United States and Canada.

Mapp’s emphasis is creating a trend, said Nicholson-Doty. Island restaurants, for example, are increasingly offering a variety of foods, and more restaurants in St. Croix are using locally sourced products.

“We are finding that there is this opportunity for us to really showcase the cultural diversity in Caribbean food and the use of our local products,” Nicholson-Doty said, noting that an annual agriculture fair in St. Croix and a recently launched Dine VI initiative are also having the added benefit of promoting tourism to the territory.

“Tourism works best when it is an infusion of the community and the visitor,” she said. “People take away experiences and that’s what we see, agriculture, farm-to-table and food as a unifying method of one having an experience. So much of your vacation is centered around what you eat and the people that you meet.”