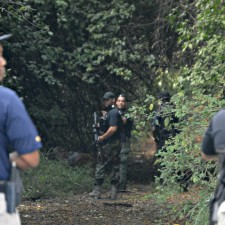 MID-ISLAND, St. Croix— Sunday, March 13, 2016 at 1:11am, officers responded to the call of a disturbance in Sunny Acres, Christiansted.

Upon arrival to the scene, officers observed fellow VIPD officers already at the scene with a black male individual detained on the ground in handcuffs.

According to the complainant, he’d just arrived at his residence and exited his vehicle when he heard footsteps approaching him from behind.

As he turned around, he observed the suspect walking toward him with a long firearm pointed towards him. He continued by stating that he had a machete in his possession and swung at the suspect several times while yelling for help.

The complainant further explained to officers that his neighbor came to his aid and assisted in retrieving the firearm from the suspect and was able to place him in handcuffs.

He had sustained several lacerations to the palm of his hand and the suspect sustained lacerations to his hands and face during the incident and was transported by ambulance to the Juan Luis Hospital for medical treatment.

While at the hospital the suspect made several utterances admitting to robbery.

Anyone with additional information concerning this incident may phone 911 or the anonymous tip service, Crime Stoppers USVI, at 1-800-222-8477.

Mega Yacht Worth $2.4M Goes Up In Flames In Charlotte Amalie Harbor