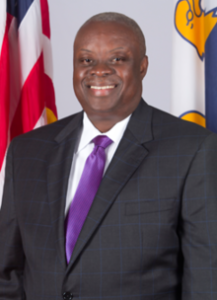 CHARLOTTE AMALIE — Gov. Kenneth Mapp said that he is working together with U.S. Department of Veterans Affairs Secretary Robert McDonald to bring healthcare for local veterans to the territory’s two hospitals.

The goal is to relocate our two vets clinics to Juan F. Luis Hospital and Roy L. Schneider Medical Center in order to provide a full range of services to Virgin Islands vets, who now must travel to Puerto Rico for care.

Secretary McDonald confirmed his willingness to resolve this long standing problem during a Monday meeting at Government House this week in Christiansted.

Mapp and V.I. Office of Veterans Affairs Director Patrick Farrell reiterated that remedying the problems brought on by lack of local healthcare for veterans was a priority of the Administration and meetings with federal officials have largely focused on addressing this issue.

The governor said he would continue to work closely with the federal agency until a plan to open V.A. Clinics at both our hospitals had been finalized.

Director Farrell said he was hopeful that they were also well on their way to addressing other significant problems with lab test processing and a lack of inpatient psychiatric care.

Secretary McDonald, who is on his first official visit to the territory, chose this week to meet with local officials so that he could present five Virgin Islanders – Jerome Ferdinand, Jerome Jackson, Aubrey Nelthropp, Carl Thomas, and Leroy Woodrup – who served the 65th Army Infantry Regiment from the Korean War with the Congressional Gold Medal of Honor. Their unit was called the “Borinqueneers” because of its large Puerto Rican component. The Secretary said they were chosen as a result of exceptional bravery against the advancing Chinese Army during the Korean War.

“It is my distinct honor to be here to recognize so many Virgin Islanders,” Secretary McDonald said.

Tranberg, who celebrated his 100th birthday on April 17, was assigned initially to the 873rd Port Company, and later transferred to the 872nd in Louisiana during World War II. In addition to the proclamation, he was presented with the V.I. Office of Veterans Affairs Director’s Test of Time Award.

“On behalf of all Virgin Islanders we want to express our thanks,” Governor Mapp told Mr. Tranberg. “We have named a day in your honor”