Man Is Pistol-Whipped, Beaten, Stabbed And Robbed On Garden Street 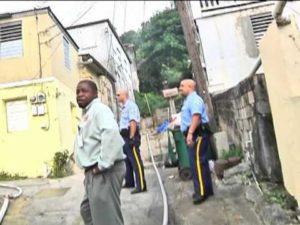 CHARLOTTE AMALIE — Friday, April 22, 2016 at roughly 8:08 p.m., officers were dispatched by the 911 Emergency Call Center to the Schneider Regional Hospital and Medical Center in response to a report of a stabbing that occurred during a robbery.

Upon arrival, contact was made with the victim who was being treated for lacerations to his back, left eye brow, and several scratches and bruises to his face, arms and body.

The victim stated that at roughly 8:30 p.m. he was walking in the area of Nye Gade, also known as Garden Street, when three masked black males rushed him from behind.

He further explained that one of the male individuals put a black firearm to his head and pistol whipped him while another male came up to him with a long thin kitchen knife and stabbed him in his back.

He then stated that he fell to the ground and the third male individual searched his pants pockets and removed his wallet which contained $460.00 and a black AT&T mobile device. The victim also stated that he was then kicked about his body and was able to get up and take off running for his life.

Man Is Pistol-Whipped, Beaten, Stabbed And Robbed On Garden Street