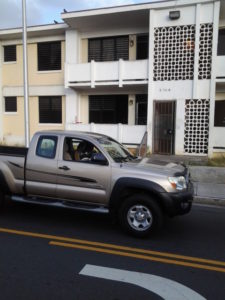 On May 19 about 11:27 p.m., officers were dispatched by the 911 Emergency Call Center in regards to shots fired in area of Oswald Harris Court Housing Community.

Upon arrival to the scene, contact was made with witnesses who stated that approximately three black males were sitting in the western archway, of Building 20, when roughly three to four unknown males exited an approaching dark colored SUV and began firing shots at the building.

At least two of the units in building 20 sustained damage from the discharging of the weapons.  In addition, items within at least two units were also damaged. Multiple castings were recovered in the roadway and outside the building.

Preliminary investigation revealed that none of the residents were injured as a result of the shots fired. According to the report, there were no reports of gunshot victims at the Schneider Regional Medical Center.

Anyone with information regarding this shooting may contact the Criminal Investigation Bureau at (340) 714-9807 ext. 5556, the anonymous tip service, Crime Stoppers USVI at 1-800-222-(TIPS) 8477 or go to www.crimestoppersusvi.org