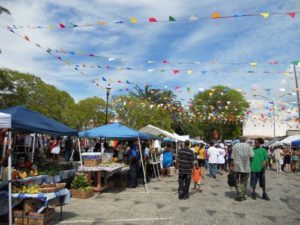 CHARLOTTE AMALIE — Three men were shot, one of them fatally as he exited a restroom at the Carnival Village early Sunday morning, according to the Virgin Islands Police Department (VIPD).

Three men were reported shot during the same incident. The first man was later identified as 25-year-old Sehdale Gabriel of Savan, was transported to the Roy Lester Schneider Medical Center after having been shot multiple times about the body and then taken straight into surgery, but later died from the injuries he sustained during the shooting.

The second man who has not yet been identified received multiple gunshots to the body and was transported by a private vehicle to the Roy Lester Schneider Medical Center where he is currently receiving treatment for his injuries.

The third man is a 13-year-old minor, who received a single gunshot wound to the left arm and was transported to the Schneider Regional Hospital and Medical Center by his parents where he received treatment for his injuries.

Preliminary investigation revealed Sehdale Gabriel, the unidentified black male, and the minor were all in the area behind of Carnival Booths number 33 and 1 when the shots were fired.

While exiting the restroom Gabriel received multiple gunshot wounds about the body and the 13 year old minor was shot in the left arm. At approximately 4:45 a.m., Sehdale Gabriel succumbed to his injuries sustained during the shooting. The crime scene was processed thoroughly by the Forensic Unit.