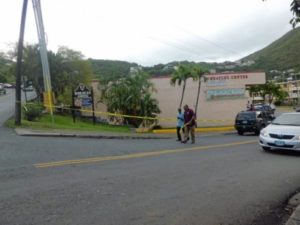 CHARLOTTE AMALIE — Police say a 34-year-old St. Thomas man was shot to death and a 26-year-old woman was critically injured when the car they were driving in was fired upon near Raphune Hill early on Sunday morning.

Police found a four-door Toyota Sedan at the bottom of Raphune Hill with Jafari Samuel in it. Also in the vehicle was a 26-year-old female who has not been identified.

Samuel and the woman were shot multiple times and were transported immediately to the Roy Lester Schneider Hospital for treatment, the VIPD said.

Samuel succumbed to his injuries at the hospital and was pronounced dead there.

The 26-year-old woman is still receiving treatment for her injuries, police said.

The case is presently under active investigation by the Homicide Task Force, according to police.