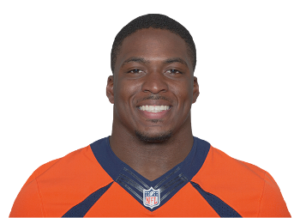 Juwan Thompson of the Denver Broncos

Thompson, who did not play in the Super Bowl for the defending champion Broncos this year despite numerous reports to the contrary, is a three-year NFL veteran from Duke University.

Head coach Gary Kubiak returned to his longtime home in Denver in 2015 and with him, he attempted to bring back the run-heavy scheme that brought success in the late 90’s. Due to roster constraints, though, it simply did not mesh.

Just over a year later, it appears Kubiak is trying again, and two players vying for one quickly-vanishing position will have an opportunity to hasten the process.

Thompson, and rookie Andy Janovich are the clear favorites to bring the fullback position back into the fold for Denver’s offense and both are seeing encouraging signs in the early stages.

“Absolutely,” Janovich said recently when asked if the offense appears to have a place for a fullback. “Just the way practice has been going, I have been getting quite a few plays every single day which is reassuring. I have been with offenses where at practice and the games I would barely play. When you get to play in practice, it’s reassuring for when games arrive.”

Janovich was a traditional fullback at the University of Nebraska during his four seasons there. He also was a standout special teams player which may already give him an edge ahead of other rookies as he pursues a roster position.

Thompson, on the other hand, is converting from running back to fullback, a position he has played in high school and part of the time at Duke University. To do so, he must put on some extra weight and learn the ins and outs of an offense that will certainly be different from 2015 and 2014.

“Whether I’m a short yardage back or blocking for Ronnie or C.J. is just an opportunity for me to get on the field,” he said last week. “Even catching passes out of the backfield as a running back or a fullback, it’s great for me because I am learning a different aspect of the game.”

The Broncos brought in several hybrid players last season from James Casey to Joe Don Duncan but before the regular season, they scrapped nearly all attempts at a two-back system.

The start of the season justified the concerns with the running game. Through the first ten weeks, the Broncos ranked 29th in the NFL in rushing yards per game (86.0) before pulling it together for the home stretch of the regular season. The last seven weeks they ranked seventh in the league (135.1 ypg) and finished 17th with a mediocre average of 107.4 rush yards per game.

“[The running game] is only going to improve more and more. We had a good run last year but we all know there is no Peyton, no Brock,” Thompson said of the need to improve the rushing attack. “It’s going to be pretty similar but having a year under our belt is only going to help.”

From the allowed media availability at UCHealth Training Center to view minicamp the last few weeks it is apparent that while the quarterbacks continue to compete for the starting job, whoever wins it will be handing the ball off often or at least play-action faking before rolling out for a pass.

It’s an offense that Kubiak is known for, and his lighter, younger offensive line should be able to execute the vintage zone-blocking scheme .

“Oh yeah, always,” Thompson said of his excitement about the run-heavy practices of late. “I’m run first, pass later always. You can’t go wrong with that but having another opportunity to put the ball in my hand or being able to help the run game is something I love to do.”

The competition between the two will be an important one to watch when camp gets underway in July. Thompson carried the ball 52 times for 272 yards in 2014 but only 18 times in the 2015 regular season for 48 yards. Janovich carried the ball 42 times for the Huskers tallying 265 yards in 13 games in 2015, good for fourth on the team.

Thompson, an undrafted free agent in 2014, is under more pressure than ever to earn a spot in his third season. Admittedly, the change back to fullback was not his favorite idea but in pursuit of a job and another year with the Broncos, he is ready and willing for the opportunity.

“Fullback is nothing new to me,” he said. “It depends on how dominant it becomes, then it will be a different role than I had in college. I’ve done head up blocking for other backs so it’s nothing new to me, it’s just trying to maintain my strength and weight. I know I can get it done when I’m given the right opportunity.”

The Broncos and Kubiak tried to return to a run-heavy offense last season but on their way to a Super Bowl run they had to concede certain desires and find a happy medium to edge out victories. This season, with the return of the fullback, the Broncos are hoping the offense looks more like 1998 than 2015.

Surely, Thompson and Janovich are hoping for the same and one or both will get a chance to make that happen.

To read more go to: 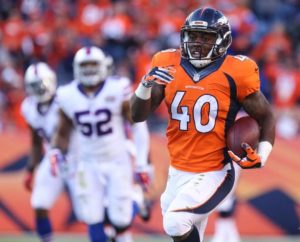 St. Croix's Linval Joseph Is Popular With His Vikings Teammates ... Because He's A Proven Winner 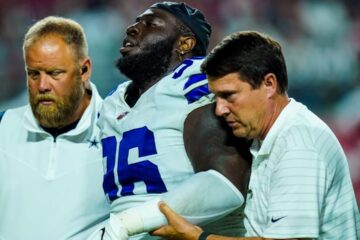