Homeland Security Conference Designates The V.I. As A ‘Fusion Center’ 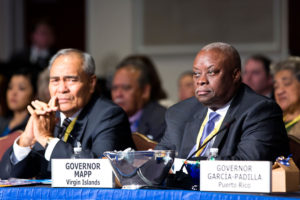 CHARLOTTE AMALIE — At the opening of a two day Caribbean Homeland Security Conference and Training Event, Gov. Kenneth Mapp said he’d like to see more of a focus on being able to secure borders in the territory and Puerto Rico.

Addressing an audience that included U.S. Department of Homeland Security Undersecretary, Michael G. Potts, Mapp said that the Virgin Islands has about 117 miles of open border, and that local resources are inadequate to police them as required.

The governor called for increased deployment of law enforcement resources to the region, and urged that the security issues in the Caribbean be assessed according to the interests of the United States rather than just those of the region.

Mapp said to the room of security professionals, that he was not being critical of the current strategy, but making the point that local resources are not enough to combat growing problems such as human trafficking, drug smuggling, and violent crime.

Mapp said that in light of the gun violence in the territory, he intends to use all resources available to his administration to reduce crime among young people. He urged parents to speak up if they are aware of their children possessing firearms, reminding parents that it is easier to have a discussion about a firearm than to plan a funeral for an offspring.

The Caribbean Homeland Security Conference is being held at the Frenchman’s Reef Hotel on St. Thomas and attended by federal and local law enforcement agency representatives from the U.S. mainland, the Virgin Islands and Puerto Rico.

The Virgin Islands has been designated as a Fusion Center, where information and intelligence are collected, analyzed, and released to the public.

The concentration of resources at various Fusion Centers throughout the nation is a part of the overall strategy to combat a range of security issues including terrorism.

Homeland Security Conference Designates The V.I. As A ‘Fusion Center’