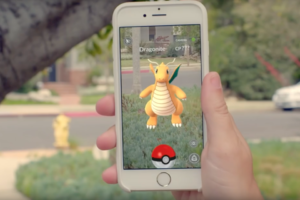 Obsessed gamers in the territory trying to get in on the mobile game action have been left in the lurch by the virtual reality app, which is available for download in the Virgin Islands but not yet part of the functional real-time gameplay.

Pokémon Go forces players to wander through the physical world around them—streets, parks, and public spaces—to catch Pokémon in a parallel cyber world.

Players can also assemble near certain structures, like churches and pieces of public art, to battle their Pokémon against computer players at “gyms.”

Meanwhile, players of Pokémon Go across the United States mainand are finding the dadburned critters everywhere (except the USVI), including some places that are considered to be hallowed ground and inappropriate for gaming.

The United States Holocaust Memorial Museum and Arlington National Cemetery, both in Washington, DC area, have both issued appeals for players to avoid hunting Pokemon on their sites.

“Playing Pokémon Go in a memorial dedicated to the victims of Nazism is extremely inappropriate,” said Andy Hollinger, director of communications at the United States Holocaust Memorial Museum in Washington, D.C. in a statement sent to CNNMoney.

“We are attempting to have the Museum removed from the game,” the statement said.

Arlington, the burial ground for the nation’s war dead, tweeted out a somber request: “We do not consider playing ‘Pokemon Go’ to be appropriate decorum on the grounds of ANC. We ask all visitors to refrain from such activity.”

Pokemon Go has a link set up for people to report sensitive locations and contact on its website.

The game, which is played on smart phones, has become crazy popular game since it was launched last Thursday. It superimposes virtual creatures in the real world using your camera and augmented reality. It has players exploring their real-life neighborhoods to capture Pokemon creatures.

Other hallowed locations where Pokemon have reportedly been spotted include the Auschwitz museum in Poland, the Los Angeles Museum of the Holocaust, the 9/11 Memorial in New York City, the Vietnam Veterans Memorial in Washington and monuments in national parks.

Pawel Sawikci, a spokesman for the Auschwitz Memorial, told CNNMoney that he wasn’t familiar with the game, but has seen screenshots posted to Twitter of the use of Pokemon Go in Holocaust memorials.

He wrote in a direct message to CNNMoney that creating Pokestops in memorials is “absolutely inappropriate.”

“We hope that the authors of the game will take this into consideration and remove such sensitive places like the Memorial from the game,” he added.

The car service Lyft said that it’s seeing a surge in passenger dropoffs to places known as Pokemon gyms and Pokestops, including St. Patrick’s Cathedral.

Twitter users have made note of churches as Pokemon Go destinations.

According to a statement from The Pokemon Company International and Niantic — the creators of Pokemon Go — Pokestops and gyms in the app are found at publicly accessible places. That includes historical markers, public art installations, museums, monuments — and apparently churches.

A representative of The Pokémon Company International declined to comment on specific Pokestops, the Pokestop mapping strategies, or on the site removal process.

But Samara Hutman, executive director at the Los Angeles Museum of the Holocaust, said the removal process appears to be swift. She said it took about an hour for the museum to be removed as a hotspot.

The app is only available in the United States, Australia and New Zealand — but reports from users are popping up in controversial sites outside of these countries.

Other locations, like National Mall and Memorial Parks have embraced the hot game. The National Park Service — which oversees the Vietnam Veterans Memorial, the Washington Monument and the Lincoln Memorial — posted on its Facebook page to encourage selfie-taking with their favorite Pokemon creatures.

“Remember to be respectful of the memorials and other visitors,” the post reads.

Mike Litterst, spokesman for the National Mall told CNNMoney, that there haven’t been any problems associated with Pokemon Go game play. “As long as it’s not disruptive to others or the meaning of the memorials then we don’t have a problem with it.”

If you don’t know what Pokemon Go is, here is a primer that explains it to you in 400 words or less: