Tim Duncan On Why He Retired: ‘Basketball Wasn’t Fun Any More’ 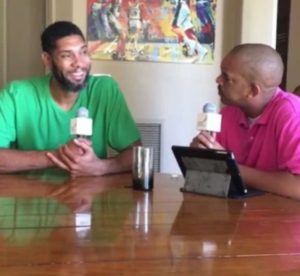 SAN ANTONIO — St. Croix’s Tim Duncan spoke for the first time on Wednesday since announcing his retirement two days prior, expounding upon his 19-year NBA career and explaining why he made the decision to leave the game.

“I can still do this. I could probably still play,” Duncan said in a wide-ranging interview with ViVid Streaming. “But when it’s time, it’s time. It’s time. I started not enjoying myself. It wasn’t fun at times. And I always said when that point comes when it’s not fun anymore then I’m done.”

As hoops fans all over the country spent Monday and Tuesday watching highlights and tributes to Duncan among the various sports television outlets, the power forward spent the day of his retirement watching the Discovery Channel.

Duncan’s reaction seemed typical of the man of few words, who spent an entire career leading by example, while spearheading the San Antonio’s current culture of selflessness.

In the days since announcing his retirement, Duncan said he received an outpouring of support from friends and family, as well as from coaches and executives around the NBA. Included among the well-wishers was Golden State Warriors coach Steve Kerr, who despite playing with Michael Jordan on the Chicago Bulls, once called the power forward the greatest teammate he ever has played with.

“He actually sent me a message and said something along those lines,” said Duncan, who won a pair of NBA titles alongside Kerr during Kerr’s two stints with the Spurs. “And again, I’ve gotten some incredible notes, messages, from so many different people that are honestly blowing me away. I didn’t expect all of this; didn’t expect the reaction I got. But it’s been amazing. I’ve spent the last two days trying to respond to everybody and trying to get back to everybody to make sure I’m thankful for their messages, their words. I did actually get a personal note from Steve.”

Spurs coach Gregg Popovich on Tuesday delivered an emotional goodbye to Duncan during a 15-minute meeting with local reporters. Duncan watched the footage of Popovich’s interview on Tuesday and admitted, “I about lost it on that one.”

Duncan also expressed appreciation for his near-universal standing as one of the NBA’s all-time greats — not just arguably the greatest power forward.

Tim Duncan fishing on a San Antonio-area lake on Wednesday.

To watch the interview by Rashidi Clenance please click on the link below:

Tim Duncan On Why He Retired: ‘Basketball Wasn’t Fun Any More’