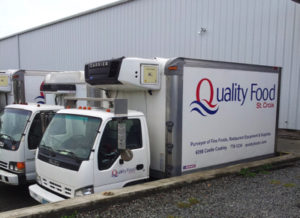 CHRISTIANSTED – A 41-year-old St. Croix man was sentenced in federal court on Thursday to seven years in prison for his involvement in an armed robbery of a food service company, according to the U.S. Department of Justice.

In U.S. District Court in Estate Golden Rock, Daniel Ramos was given seven years in prison for using and carrying a firearm during and in relation to a crime of violence and 33 months in prison for interference with commerce by robbery, U.S. Attorney Ronald Sharpe said.

Lewis also sentenced Ramos to two terms of supervised release to be served concurrently, and to pay a special monetary assessment of $200.

According to the plea agreement filed with the court, on June 21, 2014, Ramos and his co-defendant, Edigberto Diaz, armed with handguns, entered Quality Foods located at Estate Castle Coakley. They went into an office area, pointed their handguns at two individuals, and demanded that they open the safe.

The defendant and co-defendant removed deposit bags containing $24,289.17 in cash and checks from the safe. They also took cellular telephones, a music player, a laptop computer, a checkbook, and backpacks from the victims. Diaz, who carried a loaded Smith & Wesson .40 caliber semiautomatic handgun with an obliterated serial number, was shot at the scene by police.

Ramos carried a toy gun and fled the scene. He was recognized on a surveillance video and arrested.

The case was investigated by the Virgin Islands Police Department (VIPD) and the Federal Bureau of Investigation.