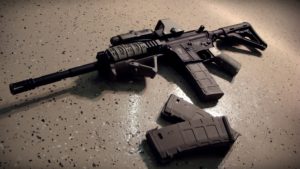 An AK-47 machine gun and magazines

CHARLOTTE AMALIE – A 24-year-old St. Thomas native admitted in federal court that a cache of machine guns and other weapons in his luggage were his.

Smith’s sentencing is scheduled for December 15, 2016.

According to the plea agreements filed with the court, on August 11 at the Cyril E. King International Airport, a law enforcement K-9 dog alerted officers to the presence of firearms inside of luggage checked in Smith’s name.

Smith faces a maximum term of imprisonment of not more than five years, and a $250,000.00 fine. Smith was remanded to the custody of the United States Marshals Service pending sentencing.

In an unrelated matter, 24-year-old Akil Smith of St. Croix was arrested by the VIPD in November 2015 and charged with possession of an unlicensed firearm. Police said then that Smith had a .9 mm handgun in the vehicle he was driving.

But Akil Smith of St. Croix contacted the Virgin Islands Free Press and said that he is no relation to Naeem Akil Smith on St. Thomas. Each man is 24 years old.

St. Vincent and The Grenadines PM Ralph Gonsalves Says 'CIA' Is To Blame For His Sex Scandals