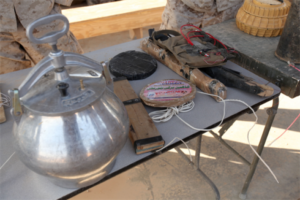 Authorities removed the device — in the form of an ordinary pressure cooker — about 9:40 a.m. today in front of the entrance for Food Center in Estate Frydenhoj, sources said.

A bomb disposal unit has been deployed from Puerto Rico by the U.S. Army to safely dispose of the IED.

A pressure cooker can be used as a bomb if explosive material and a blasting cap is inserted into it, according to Wikipedia.

Pressure cookers were used as explosive devices in the 2013 Boston Marathon bombings.