NATIONAL REPORTS: Tim Duncan Expected To Stay With The Spurs In A Management Role 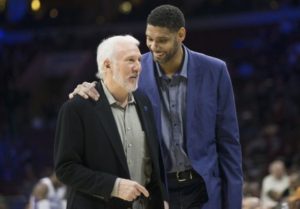 SAN ANTONIO — While “The Big Fundamental” won’t ever suit up for the Silver and Black again, it is starting to look like a position with the San Antonio Spurs might very well be in his future.

According to a report from Buck Harvey of the San Antonio Express-News, those within the organization expect for Tim Duncan to rejoin the franchise in a front office role of some sort sooner rather than later.

“Most in the organization think Duncan will eventually join the franchise in a full-time capacity,” a source told the SAE-News. “They guess he won’t coach but will instead focus on personnel. Duncan has long been intrigued by the methods that Popovich and Buford use to identify talent.”

With all the time that he’s spent as a player in the Spurs system, it would be interesting to see what type of success that Duncan could have if he moves into a position within the team’s front office.

If his track record as a player is any indication of what he’d be capable of as a consultant or executive of some sorts, we can only imagine that Duncan would enjoy plenty of success in whatever role he’s assigned to.

Tim Duncan, predictably, has been a ghost since he retired this summer, as CBS’ Mike Moore reports. He did one live streaming interview with long-time St. Croix friend Rashidi Clenance and beyond that, he has been invisible — even turning down a chance to go to the Rio Olympics with President Obama.

“No commercials, no TV appearances, he’s not announcing his new venture capital firm or doing media appearances,” Moore wrote. “He has just slid into the the enormous shadow his game left upon the NBA and probably hung out with his kids a lot.”

But if the St. Croix legend joins the Spurs in the front office, his image on TV during games will be a constant reminder of the excellence San Antonio has shown ever since he’s been there.

Duncan has always been close with the players on the team, the San Antonio Express-News reports, and many inside the organization expect him to take accept a position in management.

“They still have him around, though. Duncan hasn’t been in the Spurs’ practice facility every day this summer, but he was there this week. He hits the weight machines, does some shooting, hangs around the guys. Duncan has at times disagreed with their decisions only to be proven wrong. He’s curious why.”

This is what having a great player so tied to one franchise does for you. He becomes tied to the future even while he’s a pillar of the past. Duncan just being around puts guys on notice. They’ll have Duncan to learn from, to get advice from, and more than anything, to live up to his standard of excellence and professionalism. The Spurs built their culture around Duncan, now they can use his legacy and quiet presence to sustain it.

You walk in as a brash rookie and meet five-time NBA champion, former MVP, future first-ballot Hall-of-Famer, Greatest Power Forward of All Time Tim Duncan, and that will show you where you stand in the ranks of the game right quick.

Duncan’s departure will not be easy, but he’ll at least be there to help ease the pain of the separation, and if nothing else, this story tells something we all know but it’s important to say: Tim Duncan will always be a Spur.

NATIONAL REPORTS: Tim Duncan Expected To Stay With The Spurs In A Management Role