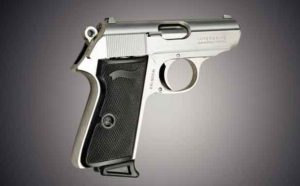 CHRISTIANSTED – A 39-year-old St. Croix man heard the illegal gun charges he is faced with in federal court on Monday, according to the U.S. Department of Justice.

If convicted, Woodley faces a maximum sentence of ten years in prison and a $250,000.00 fine on the felon in possession and possession near school counts.

He also faces a ten year sentence on the unauthorized possession charge and a $15,000.00 fine.

According to court records, the charges stem from a Gang initiative conducted by the Virgin Islands Police Department (VIPD) and the U.S. Immigration and Customs Enforcement’s (ICE) Department of Homeland Security (HSI) last December.

Agents searched Woodley and discovered an unlicensed firearm on his person.

The case was investigated by the VIPD and HSI and is being prosecuted by Assistant U.S. Attorney Alphonso Andrews, Jr.

Sharpe said that an information is merely a formal charging document and is not in and of itself evidence of guilt.

Man Stabbed In Stomach While Walking Near Plaza Extra West