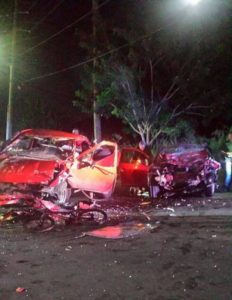 MID-ISLAND, ST. CROIX — Police said two people were killed — one in Estate Glynn and one near Estate Hope — over the weekend on St. Croix, according to the Virgin Islands Police Department (VIPD).

At least 10 people were injured in the two accidents according to eyewitness reports on social media.

On October 16, 2016  at about 6:20 p.m., the Traffic Division was dispatched  by 911 Emergency Call Center to an auto accident on the Melvin Evans Highway near Hope Road by the HOVENSA Training Center.

A preliminary police investigation revealed that an 88-year-old woman was traveling eastbound; she made a right turn to enter onto Hope Road when she impacted a traveling vehicle carrying five people including the driver.

All five passengers suffered injuries and were treated at the Juan F. Luis Hospital.

The 88-year–old woman was pronounced dead on the scene by Emergency Medical Staff and was transported to the morgue by the morgue attendant.

VIPD spokesman Glen Dratte is the current/former advertising manager for the Virgin Islands Consortium, a competitor of the leading Virgin Islands Free Press.

To hear an audio-only version of this news story read by Dratte, please press play below: