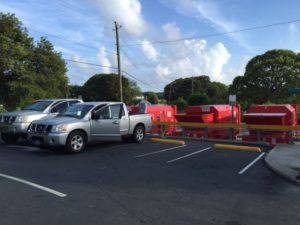 The dumpsters at Peter’s Rest on St. Croix

CHRISTIANSTED — On November 6, 2016   at approximately 5:02pm, a patrol officer, on routine patrol called the 911 Emergency Call Center of a possible DOA (Dead on Arrival); under a tree by the Peters Rest Dump Site in Christiansted.

Upon further investigation citizens in the area stated that the individual was lying on a flat lounging chair for some time.

Emergency Medical Technicians responded and observed there were no vital signs, a Family member on the scene stated that the individual    suffered from seizures.

Juanito Rosario 35-year-old of VIeques, Puerto Rico was transported by the Morgue Attendants and was pronounced dead at 6:31pm by the Doctor on duty at the Juan F. Luis Hospital. Next of kin has been notified.