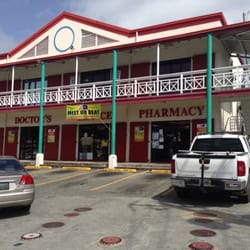 On November 07, 2016, about 4:53 p.m., Patrol Units from the Richard Callwood Command and Investigation Units traveled to Subbase to conduct an inspection of the area after citizens reported shots fired near Doctor’s Choice Pharmacy, according to the Virgin Islands Police Department (VIPD).

Officers then traveled to the Roy Lester Schneider Regional Medical Center, Emergency Room after the victim was transported via ambulance for medical attention for several gunshot wounds about the body.

Upon arrival to the hospital, contact was made with the victim, an unresponsive black male that was taken into surgery for the injuries he sustained during this incident.

The Doctor’s Choice Pharmacy depicted in our news story is about 5.46 miles away from the actual crime scene.

This case is presently under investigation by the Criminal Investigation Bureau, police said.

St. Thomas' Muhammad Jubran Admits To Trying To Sell AK-47's In The Territory