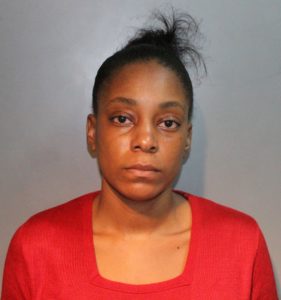 FREDERIKSTED — A 28-year-old St. Croix woman was taken into custody by Virgin Islands authorities for allegedly trying to smuggle marijuana into the Golden Grove Adult Correctional Facility — a prison that has been plagued by illegal contraband issues under four locally-elected territorial governors — from Gov. Alexander A. Farrelly in 1986 to the current governor Gov. Kenneth E. Mapp in 2016.

On Friday December 9, 2016, about 1:38p.m. police said that they were dispatched to the Bureau of Corrections (Detention Section) located at the Golden Grove Prison to investigate a possible introduction of Narcotics into the prison, the Virgin Islands Police Department (VIPD) said in a written statement released to the V.I. Free Press at

When police finally arrived at the prison after several hours they spoke to a corrections officer who said a that a sketel named Sherifa Petersen had bought a medium-sized clear bag with clothing and shoes for an inmate, the VIPD said.

Police said that they smelled a strong odor of marijuana, that was well familiar to them, coming from a pair of black Michael Jordan sneakers.

The VIPD said that a Bureau of Corrections (BOC) chief officer was present zt the same time and also smelled an odor of ganja in the air.

Authorities subsequently ripped the sneaker apart and found twos small clear plastic bag with a green leafy substance inside the sole of the sneakers, the VIPD said.

The green, leafy substance later tested positive as marijuana, according to the VIPD.

Petersen was formally arrested on a charge of “Introduction of Narcotics into the Prison,” according to the VIPD. 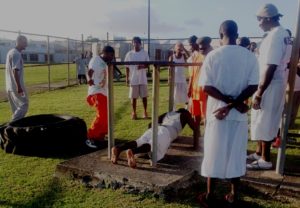 ST. CROIX OZ: The prisoners, not the guards or the prison administration, rule the roost at the Virgin Islands’ only prison — the Golden Grove Adult Correctional Facility in Estate Golden Grove, St. Croix.