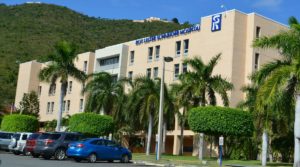 Police said that they spoke to a 28-old black man who had sustained a single gunshot wound to his upper chest and was taken into surgery, according to the Virgin Islands Police Department (VIPD).

The man failed to provide any information that would be useful to authorities about how or why his injuries were sustained, the VIPD said.

Today about 2:55 a.m., police also made contact with a 28-year-old black woman who said that she was at Oswald Harris Court when she was shot.

The woman sustained multiple gunshot wounds about her body and was taken into surgery.

“At this time I unaware if the two incidents are related, no statement was received from the first victim as yet to confirm where he had been shot prior to arriving wounded at the hospital,” VIPD spokeswoman Sakeeda Freeman told the Virgin Islands Free Press this afternoon. “As soon as I can get an update I will definitely let you know if it is indeed connected.”

The VIPD said it “appreciates the community’s support and continues to ask for your calls and tips to assist in curbing crime.”

VIPD: Someone We Won't Name Says They Were Robbed At Gunpoint In Nordsidevej On St. Thomas Last Night