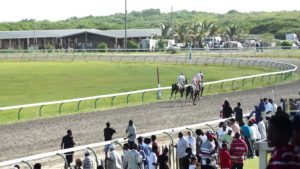 CHARLOTTE AMALIE — Gov. Kenneth Mapp said that he has submitted to the Legislature his proposal to amend the Virgin Islands Horse Racing Industry Assistance Act of 2010.

In his letter of transmittal to Senate President Myron Jackson, Mapp said that the 31st Legislature “made certain fatal amendments” to the Act by striking key provisions in three areas.

While Senators voted to retain two district Horse Racing Commissions, Mapp said that he wants a single regulatory body with nine members appointed by the Governor.

The governor said that having two regulatory agencies would be tantamount to having two Public Service Commissions regulating the singular Water & Power Authority.  His proposal also includes an increase in the stipend for each Commission member to $500 for each race day.

Mapp also wants the Legislature to restore to the Act the provision requiring compliance with federal and local anti-doping rules. He warns that failure to conduct horse races in the Virgin Islands safely and with integrity would be a fatal blow and would prevent the government and the franchise holder, VIGL, Inc., from moving forward to implement the Franchise Agreement and begin construction of new racing facilities.

The third area of concern is the formula for distribution of the casino fees, which were increased by 30 percent by the 31st Legislature, above the Governor’s original proposal.  The Governor provided a detailed listing of his preference in his transmittal letter.

U.S. Customs and Border Protection Seizes $30 Million Worth of Cocaine Near The Dominican Republic