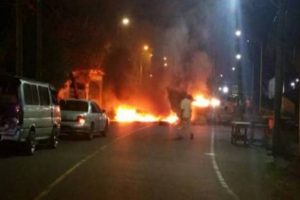 CITY ON FIRE: The capital Roseau was lit up with flames as natives of Dominica rioted to protest Prime Minister Roosevelt Skerrit’s government.

ROSEAU, Dominica – A peaceful protest rally against Prime Minister Roosevelt Skerrit during the day on Tuesday in Dominica began to deteriorate as night fell and businesses were vandalized, prompting a vigorous response by security forces in full riot gear.

The police used teargas in an attempt to disperse the thousands of protestors and reportedly deployed snipers on key rooftops.

The street protests began last Thursday in the capital Roseau and then escalated on Tuesday with gunshots heard and fires burning.

The protests against the Skerrit government have increased rapidly, following disclosure of a series of interrelated scandals involving the issue of Dominican diplomatic passports to a number of questionable individuals, including an Iranian national wanted on sanctions evasion charges.

Response to the events in Dominica from regional leaders has thus far been muted and may be tempered by the fact that the current prime minister of St Vincent and the Grenadines, Dr. Ralph Gonsalves, came to power in 2001 on the back of similar public protests.

A spokesperson for Gov. Kenneth Mapp said that he was “otherwise indisposed” and not available for comment on the turmoil in Dominica, but added that the chief executive was not drinking.