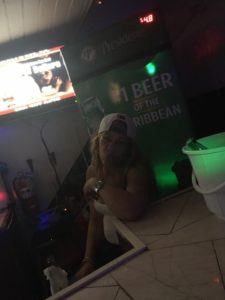 CHRISTIANSTED — A St. Croix man told police that he was sitting outside of a Water Gut bar when he was hit by gunfire near the bus shanty after midnight today.

On February 27, 2017 at approximately 12:22 a.m., 911 Emergency Call Center reported a gunshot victim in the Water gut area by the Shanty, according to the Virgin Islands Police Department (VIPD).

When police arrived on the scene they found a man sitting on a chair just outside Morena’s Bar who appeared to have gunshot wound to the upper body, the VIPD said.

Eyewitnesses on the scene said that as they were waiting for their friend, they heard some gunshots, then a Hispanic man approached them demanding money.  The men gave the Spanish man an undetermined amount of money.

The man wounded in the chest was transported to the Juan F. Luis Hospital by ambulance for treatment.

Multiple shootings and assaults have happened in and around Morena’s Bar since 2013, according to police and court records.

The VIPD is asking for your help to make more arrests and take dangerous criminals off of the streets.