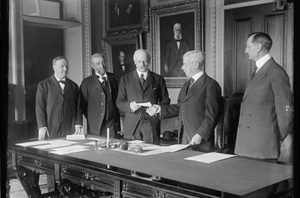 BOUGHT AND SOLD: Virgin Islands in 1917

CHARLOTTE AMALIE — It’s been on everything from car license plates, to colorful t-shirts to posters in cyberspace — and after years of promotion and hype — the grand Centennial Celebration of the Virgin Islands transfer from Denmark to the United States is finally here … tomorrow.

Christopher Columbus was cruising around the eastern Caribbean on his second voyage to the New World when he spotted a bunch of islands so pristine he’s said to have thought of the legendary 11, 000 virgin handmaidens of St. Ursula. He named the lovely dots in the blue-green waters “Las Virgenes,” a tag known today as the U.S. and British Virgin Islands.

Fast-forward to 2017, and 50 or so of the islands are welcoming visitors with a celebration of 100 years under the American flag. The festivities – mostly on the three main islands of St. Thomas, St. Croix and St. John – feature a year-long slate of parades, street dances, boat festivals, art shows, exhibitions, concerts and lots of other musical and cultural events.

Having flown the flags of Spain, England, the Netherlands, France, the Knights of Malta and Denmark over the centuries, the islands (called the U.S.V.I. for short) became a U.S. territory on March 31, 1917, when America bought them from Denmark for $25 million.

The U.S.V.I. Department of Tourism is spearheading the celebration in conjunction with 31 participating hotels on the three main islands. Visitors who book their stays by Oct. 1, 2017, on the department’s website are eligible for $300 in spending credits on the islands through the end of the year.

Among nine participating hotels on St. Croix (the largest of the three main islands) is the 138-room Buccaneer, which is celebrating its 70th anniversary this year.

Another centennial website offers a month-by-month listing of the year-long celebration’s events.

Who was St. Ursula? Other than a few words on the Basilica of St. Ursula in Cologne, Germany, no official records show she existed. All we really have about the legendary lady are, legends.

The stories generally agree that she was a 4th or 5th century British princess who was engaged to a pagan nobleman from a kingdom now part of France. But from there the legends greatly differ. A popular version claims Ursula and her 11,000 staffers drowned while crossing the channel for the wedding ceremony. Another version has it they made it to Europe, but were all killed by the Huns.

About those virgin handmaidens: What in the world did they all do? And how did Ursula find 11,000 virgins?

The legends don’t say much to answer those questions – other than one story that claims the number 11,000 was a sort of medieval typo. Ursula, this yarn says, only had one handmaiden, and her name was Undecimilla. When jotting the story down on paper, a monk mixed that name up with the words undecim millia, meaning 11,000… and thus the legend was born. 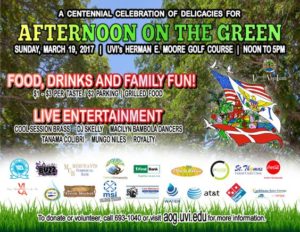 Mapp and Nicholson Say Seatrade Conference Was A Big Success ... But 70 Percent of Cruise Passengers To St. Thomas Never Get Off The Boat

Feds Confiscate 40,000 Condoms In Puerto Rico ... Say The Fake 'Rubbers' Were Made In China 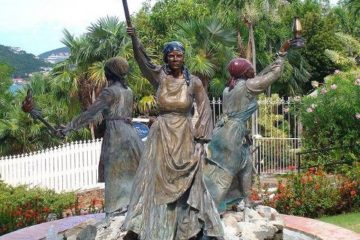