DOUBLE PLAY: St. Thomas Man Tells VIPD Hispanic Man Hit Him With A Beer Bottle In A Bar Then Followed Him Outside The Bar Wielding A Knife

CHARLOTTE AMALIE — A St. Thomas man told police he was minding his own business inside a Paul M. Pearson Gardens area bar when a man suddenly grabbed him from behind and hit him over the head with a beer bottle — what’s worse, the attacker and the attacker’s girlfriend continued to pursue him outside of the bar wielding a knife!

Police met Wednesday with a man at the Schneider Regional Hospital who said that he was at Double Play Bar Kronprindsens Gade, when a Hispanic male grabbed him and struck him numerous times to his head with a beer bottle, according to the Virgin Islands Police Department (VIPD).

Patrons at the bar were able to pull the assailant off of him, the VIPD said.

The man then ran for his safety from the area, but the Hispanic male followed him as well as the suspect’s girlfriend who had a knife.

The injured man then ran into Jala Jala to get away from the suspects, according to police.

The injured man was treated for injuries behind his ear at Roy L. Schneider Hospital, police said.

To hear an audio-only reading of this news story by VIPD spokesman Glen Dratte please press play below: 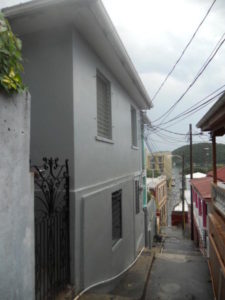 VIEW OF KRONPRINDSENS GADE: From nearby neighborohood in downtown Charlotte Amalie.

Two Masked Men Tail A Woman To Her Destination on St. Croix's East End, Beat Her and Steal Her Car

Caribbean Tourism Association Offering Scholarships From $500 to $5,000 In Hospitality Industry

DOUBLE PLAY: St. Thomas Man Tells VIPD Hispanic Man Hit Him With A Beer Bottle In A Bar Then Followed Him Outside The Bar Wielding A Knife