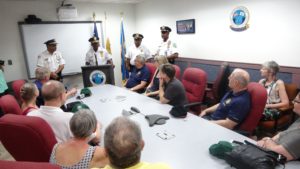 MEETING OF THE MINDS: Uniformed Virgin Islands Police Department (VIPD) top brass rolls out the red and white carpet for the distinguished law enforcement officers from Denmark visiting the territory for Centennial.

FREDERIKSTED — Two Danish chapters of the International Police Association are in the territory to attend the Centennial events.

The timing of their visit very deliberately coincides with the Centennial of the Transfer of these islands. The Danes will be here from the 24th of March until the 7th of April, 2017.

VIPD commanders, supervisors, officers and, staff shared some of their life experiences and law enforcement trials with the friendly visitors.

Special assistant to the Chief Sgt. Walton Jack gave them a tour of the VIPD operations, and Chief McFarlande shared cultural tokens. They enjoyed local culinary delights along with local drinks.

The friends of Denmark organized an excursion for IPA back in 2012, the officers stated “we feel at home, not only  being in a familiar environment but feels a connection to these Islands.”

To hear an audio account of this news story prepared by VIPD spokesman Glen Dratte please press play below: 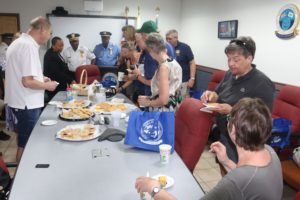 CRUCIAN FOOD TROUGH: The Danish visitors did not appear to be underfed, but the good souls at the Virgin Islands Police Department (VIPD) fed them anyway, as is the generous hospitality custom in the territory.

REPORT: V.I. Workers Risk 'Injury Or Even Death' Because Local Labor Department Has Failed To Complete Health and Safety Inspections