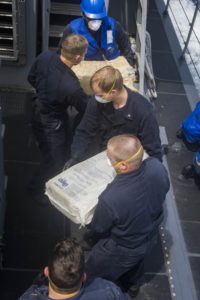 The Zephyr, along with the Karel Doorman-class multi-purpose frigate HNLMS Van Amstel of the Royal Netherlands Navy, pursued and boarded a small panga fishing boat off the coast of Curaçao on April 19.

“Today’s success was due to the high professionalism and cohesive integration of the Zephyr crew and USCG LEDET,” said Lt. Cmdr. Cameron Ingram, Zephyr’s commanding officer, according to a Navy press release.

Zephyr is homeported in Mayport, Florida, and is currently deployed in the Caribbean in support of Operation Martillo, an ongoing joint service and multi-nation operation headed by the U.S. Southern Command and the Navy’s Mayport-based U.S. 4th Fleet.

In the five years since its 2012 launch, Martillo has supported the seizure of 693 metric tons of cocaine, $25 million in bulk cash, 581 vessels and aircraft and the arrest of 1,863 detainees, according to the U.S. Southern Command.

Meanwhile, the Dutch Navy said it seized a total of nearly 700 kilograms of cocaine in two separate drug busts in the Caribbean in the last 48 hours, Hart van Nederland reports.

During a shooting exercise off the coast of Curacao, Dutch frigate Zr. Ms. Van Amstel received a report of a suspicious small motorboat north of the territorial waters of Colombia. The NH-90 helicopter was deployed to find the motorboat, and Zr. Ms. Van Amstel set sail in its direction.

Before the arrested crew members could be transferred to the U.S. Coast Guard, another report of a suspicious boat was received. A RHIB with a U.S. Coast Guard also boarded this boat and seized 15 bales containing about 350 kilograms of cocaine. The people on board were arrested.

All detainees and cocaine were transferred to the United States Coast Guard.

Zr. Ms. Van Amstel is currently helping with anti-drug operations on the Caribbean Sea. The ship and its crew form part of an ongoing counter-narcotics operation led by the United States.

The Royal Dutch Navy ship Van Amstel this week has intercepted two large batches of cocaine in the Caribbean Sea totalling close to 1,100 kilograms. It concerned the third and fourth haul in two weeks.

The first go-fast was spotted and kept under surveillance by the ship’s NH90 maritime-combat helicopter until the arrival of the Van Amstel. The helicopter went in pursuit when the go-fast tried to get away at high speed. Warning shots were fired, which the captain of the go-fast ignored.

In order to get the vessel to stop, the helicopter gunman took out the engines of the go-fast. The navy ship then deployed its Rigid Hull Inflatable Boats (RHIBs) with a boarding team of the United States Coast Guard

The four men in the go-fast were arrested and transferred to the U.S. Coast Guard, together with the 330 kilo cocaine. One of the smugglers was injured during the action. He was treated on board of the Navy ship and then flown out to a hospital.Earlier this week there was another report of a suspected go-fast which was located about eight hours sailing from the Van Amstel.A US patrol aircraft kept an eye on the go-fast while the multi-purpose frigate set course towards the suspected vessel. The NH90 helicopter managed to stop the go-fast after which a boarding team of a US patrol ship arrested the crew.On board of the go-fast, authorities said that they found 750 kilograms of cocaine wrapped in packages. The five-member crew of the go-fast did not resist: they were exhausted by the bad weather conditions and the high waves of up to 8.2 feet (2.5 meters).

This week’s interceptions were the third and fourth large drug catches this month. Only a week ago, Dutch Defence reported that it had caught two shipments of cocaine totaling close to 700 kilograms in one night. In these cases the interceptions were also carried out in conjunction with the US Coast Guard.

MAPP: The Time Has Come To Invest In Foster Care In The Territory ... May Is Foster Care Month

Week Of The Young Child Gets Kids Out of The Classroom For Activities And Fun! 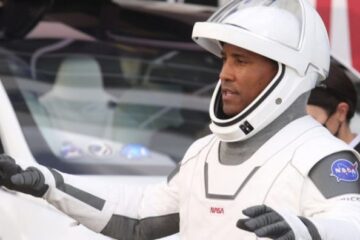 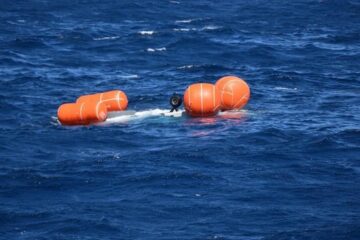