St. Thomas Man Shot In The Arm on Raphune Hill Drives In Wrong Direction For Hospital Towards Friend’s House In Frydenhoj Gold Hill

CHARLOTTE AMALIE — A St. Thomas man told police that he was sitting in his car talking on his cell phone at the top of Raphune Hill at rush hour when someone suddenly walked by his car on foot and fired two gunshots at him on Monday.

On Monday, May 15, 2017 at approximately 4:56 p.m. the 911 Emergency Call Center received a phone call in regards to a gunshot victim in the Frydenhoj Gold Hill area, the Virgin Islands Police Department (VIPD) said.

The 23-year-old man was later transported via ambulance to the Roy Lester Schneider Regional Medical Center Emergency Room, according to the VIPD. He said there was “no reason” for someone to shoot him.

The man told police that he was not thinking clearly and drove himself to a friend’s house in Frydenhoj about 4.22 miles away in an easterly direction — in the opposite direction of the hospital which was only 1.1 miles to the West of Raphune Hill. The man then called for an ambulance to pick him up from Frydenhoj.

The man sustained a single gunshot wound to the back of his left upper arm and was treated by the Emergency Room doctor for his injury and released.

The case is currently under active investigation by the Criminal Investigation Bureau, police said. 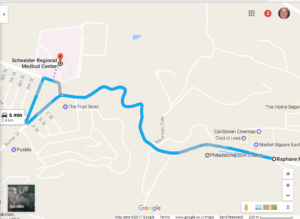 GOOGLE MAP: The distance between Raphune Hill and the Schneider Regional Medical Center is about 1.1 miles to the West. The man drove 4.22 miles to the East to Frydenhoj Gold Hill after being shot in the arm — the opposite direction to the hospital — then he called for an ambulance to pick him up.

VIPD's 'Basketball Fete' Provides At-Risk Teenagers A Chance To Interact With Each Other In A Healthy, Safe And Social Environment

St. Thomas Man Shot In The Arm on Raphune Hill Drives In Wrong Direction For Hospital Towards Friend’s House In Frydenhoj Gold Hill