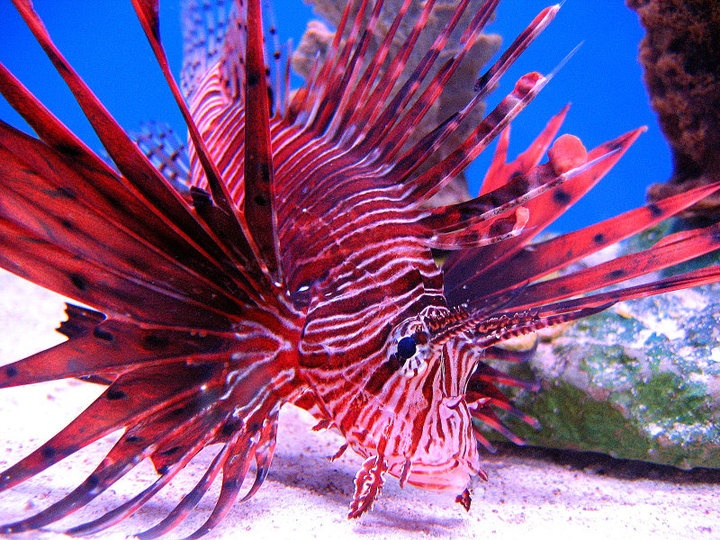 INVASIVE SPECIES: The lionfish is steadily eating most of the new species scientists had just discovered — the goby fish.

WILLEMSTAD — The invasive lionfish, a predator with venomous spines that has invaded Caribbean coral reefs, has found a new market to exploit: the “twilight zone,” an area of ocean that lies below traditional SCUBA diving depths, where little is known about the reefs or the species that inhabit them.

Researchers from the University of Washington and Smithsonian Institution have reported the first observed case of lionfish preying upon a fish species that had not yet been named. Their results, published May 25 in PLOS ONE, may indicate an uncertain future for other fish found in the largely unexplored deep-ocean coral reefs.

“Lionfish aren’t going anywhere, and we are faced with the fact that they are permanent residents on Caribbean reefs,” Luke Tornabene, curator of fishes at the Burke Museum of Natural History and Culture in Seattle and an assistant professor at the UW’s School of Aquatic and Fishery Sciences, said. “The hope is that the learning curve is quick and other fish realize lionfish are predators. Right now, studies have shown some prey species to be pretty naïve.”

The scientists discovered the new fish, which they named Palatogobius indendius (Ember goby), while on several submarine dives off the coasts of Curacao and Dominica. The new species described in the paper has a bright orange stripe down its spine and schools together in masses of about 100 fish—starkly different behavior from most gobies that hide as individuals in holes or cracks in the reef, making the new species an easy target for lionfish attacks.

From a submarine, they recorded footage of a lionfish cornering, attacking and eating this new species. Lionfish employ hunting tactics that are unfamiliar to native reef-dwelling fish, such as using their long fins to slowly stalk and push prey into a corner. They also shoot jets of water out of their mouths to disorient their prey, and scientists have even recorded lionfish making a “roaring” sound to communicate and potentially ward off would-be predators.

The scientists are concerned that lionfish are now swimming to deeper reefs—down to nearly 250 meters (about 800 feet) below the surface off Curacao—and likely eating fish that live in those largely unexplored parts of the ocean.

“Once we discovered invasive lionfish—sometimes in huge numbers—inhabiting barely explored deep reefs, our concern was that these voracious predators might be gobbling up biodiversity before scientists even know it exists. This study suggests that they are doing just that,” said co-author Carole Baldwin, curator of fishes at the National Museum of Natural History.

The good news is the goby species being eaten by the lionfish appears to be abundant throughout the Caribbean. The researchers have observed it in large numbers on many submarine trips around the region. But almost a third of the fish species along deep reefs haven’t yet been named, and they could be at risk if lionfish continue to raid the area.

“The other species still undescribed on these reefs are very rare and occur in lower abundances than our new species. If they are getting eaten by lionfish, they may be in more trouble than the Ember goby,” Tornabene said.

“There are still many coral reef fish species that are waiting to be described—and some of them will inevitably end up in the guts of lionfish.”

As coral reef ecosystems around the world decline because of climate change, pollution, disease, coastal development and overfishing, the deep-water reefs hold a promise of refuge for species that are able to survive in deeper water. The presence of an invasive predator like the lionfish, which likely came to the Caribbean from an aquarium release off Florida in the early 1990s, could be devastating if they are eating native fish and exploiting the ecosystem with no known predators to keep them in check.

The researchers are one of only three teams of biologists in the world collecting specimens in the twilight zone parts of the ocean, and this team is the only one using a submarine to catch and study fish. They have taken about 150 dives to Caribbean reefs using a 6.5-ton submersible with two robot arms that stuns fish for capture by spraying water or anesthetic, then catches them using a vacuum hose.

“From inside a submarine, it’s really hard to catch a small fish that is swimming, and it requires incredibly skilled pilots and scientists and a lot of patience,” Tornabene said. “We’ve been able to do it with such success that we have come back from each trip with thousands of specimens.”

This summer, they will test a different submarine that can go to depths of more than 800 meters (about 2,700 feet) off the coast of Honduras.

The researchers plan to look inside the stomachs of lionfish captured in deep water to see what, in fact, they are eating. It’s possible they may find other new species, Tornabene said, and probably more of the new goby they recently discovered. They also are analyzing the genetics of this new fish from different parts of the Caribbean to see how connected different deep-reef systems are to one another.

GOBY FISH: A new species of fish discovered between Curacao and Dominica by regional scientists working for the University of Washington and the Smithsonian Institution.