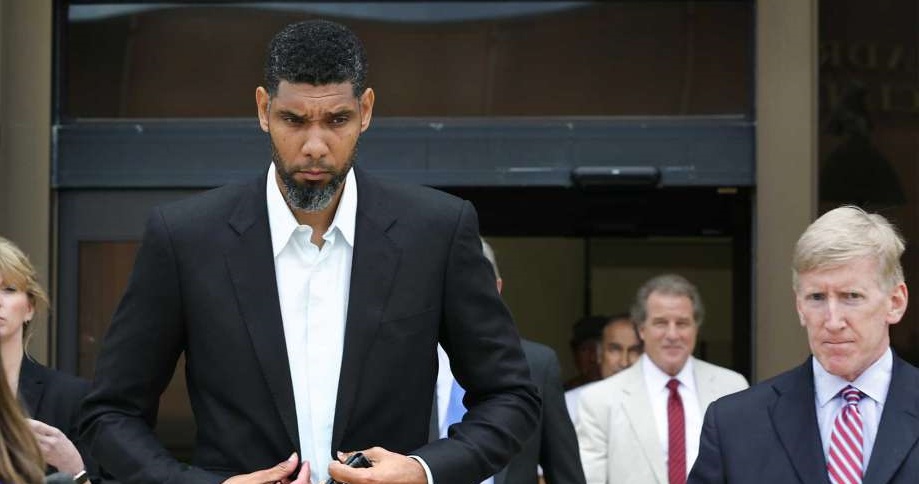 STERN LOOK: In pleading guilty, Charles Banks IV, 49, of Atlanta, admitted to a judge that he bamboozled Tim Duncan into guaranteeing a $6 million loan used as part of an investment in a sports-merchandise company, Gameday Entertainment LLC that Banks was chairman of. In total Banks allegedly stole $13.5 million from the St. Croix native.

SAN ANTONIO – Former Spurs legend Tim Duncan said Wednesday that all his preparation for fame and fortune could not prevent him from being a victim of fraud.

Charles Banks IV pleaded guilty in April in a multi-million dollar federal wire-fraud case and Wednesday, he found out his punishment. He was sentenced to four years in federal prison.

“Obviously, putting someone in prison is not what you want out of this,” said Duncan after the sentencing. “But when you break a law and do a crime, you have to pay up and unfortunately, that’s what happened.”

In federal court, Banks said he was sorry for the crime he committed. He also apologized to Tim Duncan for lying to him and getting him to guarantee a $6 million loan for Gameday Entertainment.

Duncan made sure that he gets to express what was on his mind, as he was very vocal of his disdain of Banks.

“I just wanted you to own up, pay up and we’d move on,” Duncan told Banks during a victim impact statement at Banks’ sentencing in federal court. “You wouldn’t, so now we’re here with this in front of a judge.”

Banks had embezzled Duncan $6 million through questionable investment deals with a court testimony saying the former Spurs big man had lost a big fraction of the $24.1 million he had invested with Banks.

During that time in 2013, Banks was chairman of the board of Gameday.

“He apologized and I believe he was sorry for it,” Duncan said. “But because of what was done, the judge and the courts decided his punishment, so, he’s having to deal with it.”

During sentencing, the defense said Duncan is a hero in this city, but there was no “loss” on the $6 million loan.

The prosecution argued that the loss in the case is actually $13.5 million.

“I remind everyone that the reason Tim worked with the government and instructed everyone to work with the government as much as we did was because he wanted to make sure this did not happen to others,” said Attorney Tullos Wells, Bracewell LLP. “We want to make sure an example was set, that you cannot take money from these young athletes or others and get away with it.”

“I was coached early on in my career for something like this,” Duncan said. “I thought I was prepared the right way. I thought I did the right things and it still happened so, obviously, it could happen to anyone.”

Garnett was an investor along with Duncan in the loan, but he did not comment after the sentencing.

In addition to the four-year sentence, the U.S. District Judge ordered Charles Banks to pay $7.5 million restitution and that he be placed on supervised release for three years after completing his prison term.

Banks will have to report to federal authorities by Aug. 28.

VIPD Says It And Highway Safety Will Have Zero Tolerance For Drunk Drivers For 4th of July ... And The Summer