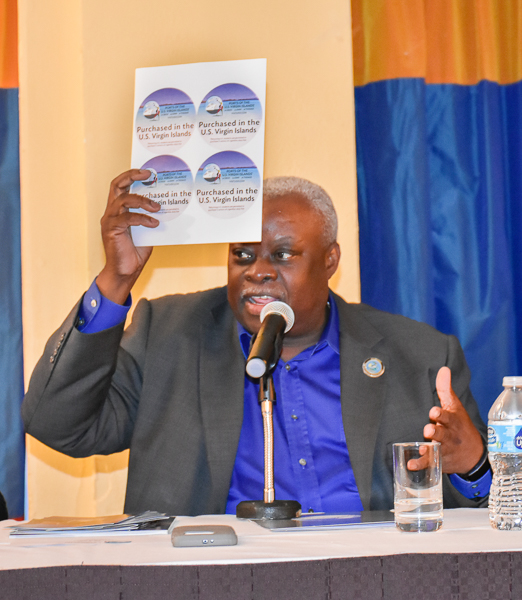 PRIDE IN THE TERRITORY: Gov. Kenneth Mapp said business owners selling products made in the territory should proudly put these stickers on their products.

Members of the government and representatives of the Florida-Caribbean Cruise Association (FCCA) offered presentations on issues of concern to a large public gathering at Frenchman’s Reef & Morning Star Marriott Beach Resort on Thursday night, focusing on opportunities to reverse the downward trend in cruise passenger traffic, expenditure and guest satisfaction scores.

Cruise line executives and industry experts say traffic congestion and lack of water transportation from either the West Indian Company or Crown Bay docks are chief among visitors’ complaints about Charlotte Amalie.

“If we can point to one thing that has held St. Thomas back, that is the inability to move people,” said FCCA President Michele Paige.

Mapp said that harbor transportation is a priority and proposals are now being formally evaluated for a ferry service that will move passengers from the cruise ship docks to downtown Charlotte Amalie and Water Island. Public Works Commissioner Gustav James reported that the RFP process is ahead of schedule and harbor transportation services are expected to be operational by year’s end.

Paige offered data collected by the cruise lines, which indicated that passengers are spending less time ashore because they think they already know the destination. She noted global competition for cruise visits has been intensifying and called on industry stakeholders to help raise guest satisfaction by improving the visitor experience. The key to this, she explained, is tapping into what makes the U.S. Virgin Islands unique and sharing stories that encompass the rich history and authenticity of the destination.

“They want something they can’t get any place else. They want to know you, they want to experience you, they want to take you home. … lots of places have beautiful beaches – that’s important – but you have to tell the story,” she said. “I’m excited because you do have it all, you just have to polish it up and you have to, once again, get hungry.”

Paige praised the Governor for his leadership in advancing the cruise sector in the Territory: “You have such phenomenal leadership in the Virgin Islands and together we can be strong. This is Team USVI and I am proud to be a member of this team,” Paige told the audience, which included several members of the Legislature of the Virgin Islands.

Federico Gonzalez-Denton, Royal Caribbean Cruises’ Associate Vice President of Government Relations for Latin America, Caribbean and South Florida, shared that his company has plans to boost calls to St. Croix, but sustained increases will depend on the level of customer satisfaction.

Carlos Torres de Navarra, Vice President, Commercial Port Operations for Carnival Cruise Lines, said his company was “here to stay” and encouraged the destination to prepare for the future, which includes bigger ships, more demanding guests, and more competition from other Caribbean ports. He asked: “What are we doing today and tomorrow to make this a more welcoming experience? What are we doing to differentiate ourselves? … What (are) St. Thomas (and St. Croix) doing to improve the experience?”

Governor Mapp invited several members of his Cabinet to update the gathering on major infrastructure projects currently underway to address concerns of both cruise executives and local stakeholders. Commissioner James assured that improvements to Crown Bay, Main Street, Veterans Drive and the Moravian Highway were in the cards and that the new Harbor Transportation System represents a major step forward.

Task force member Richard Berry, President of TOPA Equities VI Corporation, lauded the Administration for convening the town hall meeting and called on all stakeholders to work closer together to keep pace with industry trends and improve the product and the visitor experience.

The task force comprises representatives from the private sector, including retail stores, ground transportation operators, spirits distributors and restaurants; the Virgin Islands Port Authority, the West Indian Company, the Department of Tourism, the Department of Property and Procurement, the Department of Public Works, the Office of the Governor and members of the 32nd Legislature.

A similar task force is being developed for the island of St. Croix and will launch in the fall. 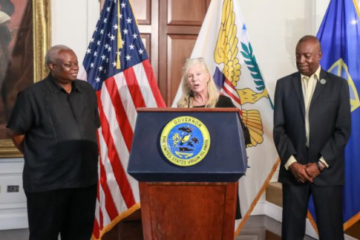 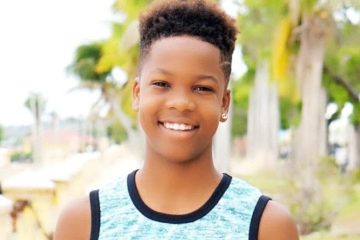