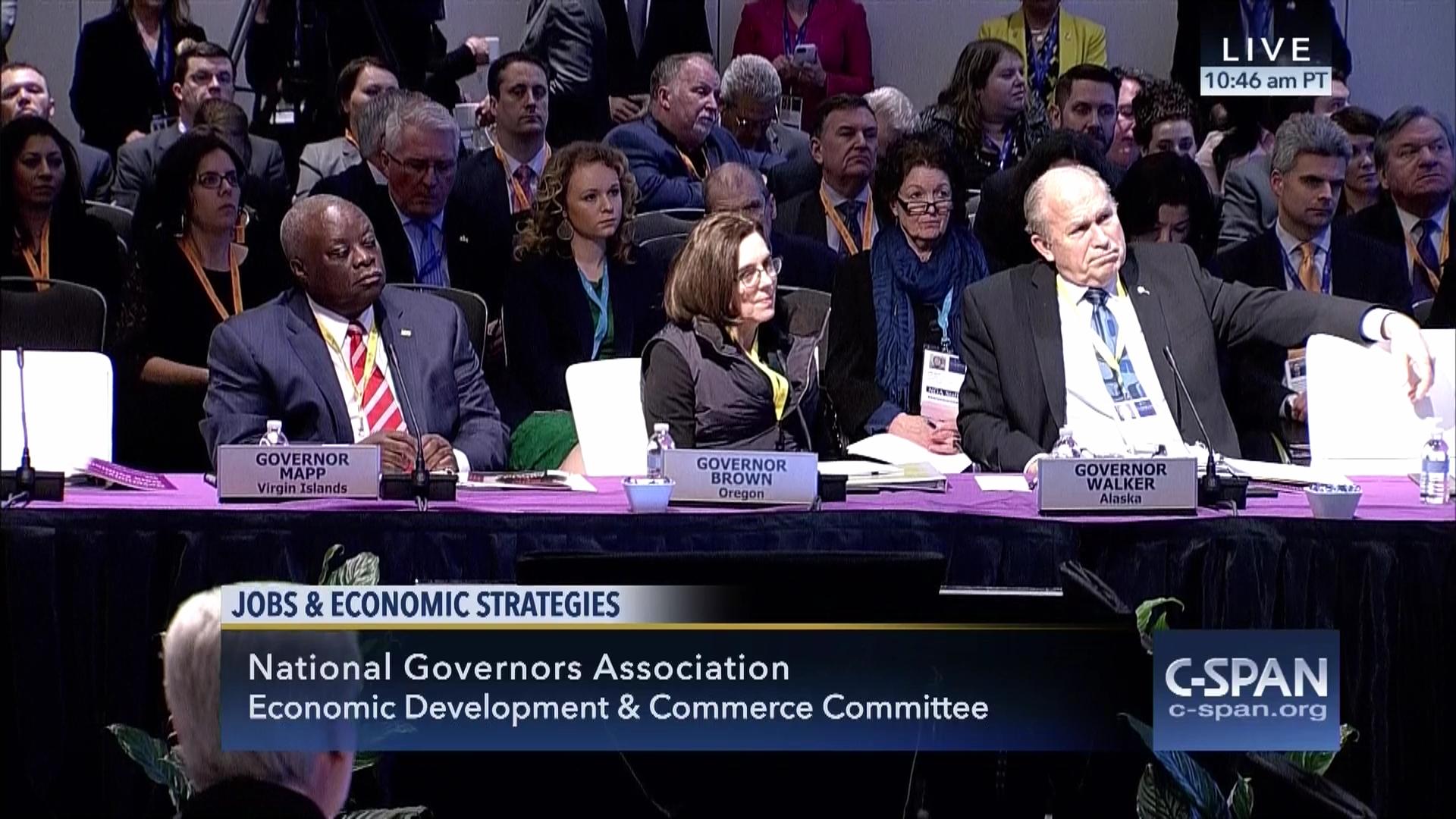 PROVIDENCE, R.I. —  A jarringly dark commentary by Tesla CEO Elon Musk and wrangling over the federal health care bill dominated the third and final day of the National Governors Association meeting in Providence on Saturday.

Organizers say roughly 1,800 attendees registered for the NGA’s gathering, including more than 30 of the nation’s governors, which Virginia Gov. Terry McAuliffe said was the group’s best showing ever for a summer meeting. Democratic Gov. Gina Raimondo said she was elated by the turnout.

“I think it’s been great,” Raimondo told reporters Saturday afternoon, before departing to take the other governors to Newport for festivities including a clambake at the Eisenhower House.

“Everyone seems to be getting a lot out of it. The governors are happy,” she said. “Everyone loves Rhode Island. I can’t tell you how many people have said to me, ‘Rhode Island’s amazing – I love it. The food’s great. It’s the best conference we’ve ever been to.’”

Saturday’s official NGA business was more low-key than Friday, when both Vice-President Mike Pence and Canadian Prime Minister Justin Trudeau addressed the gathering. The final headliner was Musk, the billionaire futurist behind the Tesla car company as well as the SpaceX space exploration initiative.

Musk urged the governors to focus on writing thoughtful regulations that don’t disincentive businesses from expanding and innovating. “It’s always important to bear in mind that regulations are immortal,” he said. “They never die unless somebody actually goes and kills them.”

Musk also issued a stark warning about the potential perils of artificial intelligence, calling it “a fundamental risk to the existence of human civilization.” He urged the governors to proactively examine how the technology should be regulated before it takes a dangerous turn and there are “robots going down the street killing people.”

The Trump administration continued a full-court press Saturday to convince skeptical governors to support the health bill proposed by Senate Republicans in Washington. Democratic governors and even some Republicans have expressed varying degrees of concern about how much the proposal would reduce federal spending on Medicaid in the future.

Pence used his speech Friday to pitch the legislation as “the right bill at the right time to begin the end of Obamacare,” and also met privately with some governors. On Saturday, Health and Human Services Secretary Tom Price held a closed meeting with the governors to try and marshal support for the bill.

Connecticut Gov. Dan Malloy, a Democrat, scoffed at Price’s message as he left. “Literally full of misinformation, lies, misstatements – it was exactly what I expected,” Malloy told Eyewitness News.

Malloy said few of his Republican counterparts spoke positively about the bill. “There’s two or three or four acolytes, but other than that everybody’s worried, because they know what’s happening,” he said. “This is probably the largest shift of federal cost-sharing back to state governments in the history of the United States.”

“Obviously, my primary interest is what does this mean for Massachusetts and the people of Massachusetts, and the redraft as currently written would cost the Commonwealth billions of dollars over the course of four or five years,” Baker told Eyewitness News.Massachusetts Gov. Charlie Baker, a Republican, was unswayed by the administration’s emissaries.

Baker noted Massachusetts has implemented near-universal health insurance through waiver agreements that have the federal government share the cost. “I’m sort of one of those people who thinks a deal’s a deal, and I’m not going to support anything that doesn’t make it possible for us to honor that waiver and continue to implement the program that’s been so successful in Massachusetts,” he said. “This does not do that.”

Raimondo met privately on Saturday with both Ballmer and Musk, and said she used the latter meeting to encourage the Tesla founder to invest money in Rhode Island. She said she cited the state’s pioneering offshore wind farm as well as its expertise in energy and brain science, and noted voters recently authorized the state to spend $20 million on a new innovation campus.

Beyond health care, Raimondo said her other big takeaway from the meeting “is how fast the economy’s changing, and how much of a job I have to do to make sure Rhode Islanders are going to have a shot and get a good job. Jobs are changing. The way we teach students has to change, the way we train people for jobs has to change, so everybody has a good chance throughout their career to get a good job.”

U.S. governors meeting in Rhode Island also say they’re frustrated more progress hasn’t been made in combating the opioid overdose epidemic and they share a sense of urgency in addressing it.
More than 20 governors discussed ways to curb opioid abuse Thursday during the National Governors Association summer meeting in Providence.

Democratic North Carolina Gov. Roy Cooper told the other governors he has “had enough” and he knows they have too.

Republican Massachusetts Gov. Charlie Baker spoke about how crucial it is to address the over-prescribing of prescription pain medications in the U.S.

Several governors stressed the importance of attacking the problem from multiple angles, including prevention, education, treatment and law enforcement.

The acting director of the White House Office of National Drug Control Policy moderated the discussion.

U.S. governors meeting in Rhode Island are having mixed reactions to the unveiling of the new health care bill, with some Democrats calling it a nonstarter and some Republicans heralding it as progress.

Virginia Democratic Gov. Terry McAuliffe says the president promised that everybody would get coverage, it would cost less and there would be better results. He says the new plan doesn’t do any of that.

But Republican Govs. Matt Bevin, of Kentucky, and Asa Hutchinson, of Arkansas, say the new bill represents progress. Bevin says he thinks it puts more of an emphasis on state control and flexibility to design health care programs.

Some of the nation’s governors are meeting this week in Rhode Island to discuss the biggest challenges facing their states.

Some issues include the possibility of major changes to Medicaid and states’ health insurances marketplaces under the Republican health care plan in Congress, the ongoing opioid epidemic and the impact of climate change.

Governors from more than 30 states, Puerto Rico and the U.S. Virgin Islands have said they’ll attend.

Calvin Callwood's Divorce Case Appeal In Florida Breaks Down In Court Over Issue Of What St. Thomas Property Is Worth