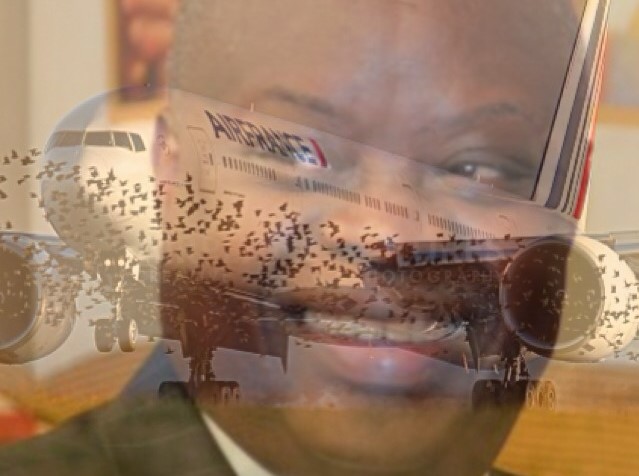 CHARLOTTE AMALIE –  Is this for the birds?

Most importantly, Mapp said that he saw a “grave danger” to aircraft flying in to the territory from “bird strikes.”

So he said that he spent all of last week in an “an educational immersion at Denver International Airport” so that he personally can tweak airport operations territory-wide to make sure that pigeons, seabirds and pelicans do not adversely affect tourism to the islands.

“I love to fly,” Mapp admitted. “Everywhere but back to the territory where I am governor. We also discussed the feasibility of building a chunnel between Puerto Rico and St. Thomas with Denver airport officials. I told them that my campaign theme was ‘A Time To Build’ and I intend to live up to that promise — if it costs the federal government all the money they have left.”

The one-term governor said that he led a government delegation, which included senior officials and the leadership of the Virgin Islands Port Authority (VIPA), and that “the visit featured the sharing of intelligence and best practices by the executive team at the country’s sixth busiest airport.”

In addition to a tour of the airfield and control tower, Virgin Islands and Colorado officials spent an entire day focused on the multiple processes that help the airport deliver more than $26 billion in economic benefits to the Rocky Mountain state.

Kim Day the CEO of Denver’s airport, described it as a “complex organism.” The airport processes close to 60 million passengers a year, has 35,000 badged employees, and is responsible for 115,000 indirect jobs.

The USVI team learned how Denver officials continually invest in the passenger experience, including shopping and dining, technology and entertainment.

Mapp said the “tremendous learning experience” went beyond his expectations – from discovering how the Denver airport handles issues with its own neighboring landfill, to mitigating the challenges faced by bird strikes, to dealing with regulatory issues and leveraging public-private partnerships.

Earlier in the week in Atlanta, the Virgin Islands team, which included additional representatives from the Waste Management Authority, met with the Federal Aviation Administration (FAA) to discuss the decades-old regulatory issue concerning the landfill near St. Croix’s airport. “We were heartened to note the similarity of a landfill coexisting within Denver’s airport and the regulatory solution which was arrived at with the FAA. This is an issue the USVI has been trying to resolve since 1983. It has cost us millions of dollars in direct spend and millions more in the suspension of federal funds for airport improvements.”

Governor Mapp noted that Denver International Airport’s focus on “rebuilding the new, replacing the old and caring for the current” resonated well with his team as they prepare to holistically elevate the passenger experience at USVI airports. He added that “moving the Virgin Islands airports to the next level by becoming a real, exceptional experience for visitors” should no longer be a concept. “We must act, and act strategically.”

Kim Day, CEO of Denver International Airport, saw this visit as the first step in leveraging synergies between her office and the USVI. “The world is becoming smaller, in the way we all think about it. Millennials think nothing about getting on a plane and going to Europe for the weekend. … So, as the world becomes smaller, smaller airports have a great opportunity to raise their flag and be recognized as a great place to go. Plus, I’ve got to say, you (are) recognized as an unbelievable place to visit. You’re already on this list of everybody’s bucket list. If we can help you improve your airport, that’ll help you get the capacity to be ready for all those great visitors that are going to be coming to you in the next few years.”

“There’s no substitute for actually visiting a place, really doing a deep dive with the people who have gone through an experience and getting their lessons learned … there is no substitute for actually getting on the ground and seeing a project that you want to model after. We did that as part of our project. I took our City Council, we went to Europe and saw Heathrow and saw the Amsterdam airport. So the value that your team gets out of it is to sit down here, have a day to really study and not have any distractions and learn about this – and see it in a concrete way.”

A highlight for the USVI delegation, Mapp said, was learning of the strong demand for nonstop flights between Denver and the Territory, and how tourism officials can work with airlines and the airport to increase airlift to the destination.

The governor said a taskforce would now be formed to develop a formal partnership between VIPA and the Denver International Airport.

“We have a good path forward – Ms. Day has offered, and I have accepted, an exchange of managers and directors from the Virgin Islands Port Authority to come to Denver to get on-the-ground training and experience … and she is prepared to send her managers to spend a week or two working with our teams in the territory.”