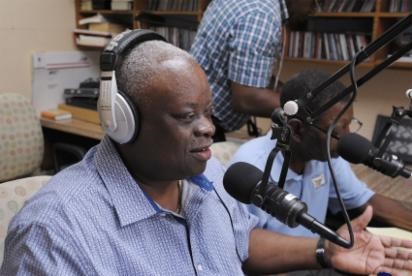 SMOKE AND MIRRORS: Gov. Kenneth Mapp tells radio DJ Addie Ottley that he will have to drastically cut health care benefits to retirees in order to keep his government out of bankruptcy.

CHARLOTTE AMALIE – In an effort to reduce much of the government’s cost of health insurance benefits, Gov. Kenneth Mapp said that he has proposed legislation revising the formula used to calculate the share of the cost of premiums.

In all fairness to the decision-makers, succeeding in the fast-paced world of health care administration requires a keen finger on the pulse of the industry. Understanding frontline issues in health care and the best way to address them will help administrators at all levels create a system where the doctors, hospitals, and patients are all poised to succeed.

The change is necessary, he said, if the Government Employees Retirement System is to reduce its unfunded liability and if the government’s perpetual general fund deficit is to be reduced and eventually eliminated.

Mapp’s proposal would fix the government’s contribution to the cost of health insurance for active employees and their dependents at 60 percent. This should solve some of the major US healthcare issues by making such saving, but will affect certain groups of people. Some of the other key issues in modern health care administration include:

Other frontline health care issues in the US can be seen on the University of Southern California website.

With the governments cut to the retirement system, retirees 65 years and older, who are eligible for Medicare coverage, the retiree would pay 100 per cent of any supplemental health insurance premium.

For retirees under 65 years, the government would pay 50 percent of supplemental insurance premium costs.

Under the governor’s proposal, for any retiree whose annual income is $20,000 or less, the government’s contribution to the health insurance premium would be the same as for an active employee, which is 60 percent of cost.

The Mapp-Potter Administration projects an estimated savings of approximately $21,000,000 annually if these reasonable changes are implemented. In his transmittal letter to Senate President Myron Jackson, Mapp describes the current health insurance benefit plan for retirees as “generous, but no longer affordable.”

The proposed change in shared cost is designed “to sustain employment, secure salaries and contribute funds toward the solvency of the retirement system”, he states. Currently, the cost to the government for health insurance for retirees is $40 million per year.

Mapp said that his strategy is to reduce the deficit by reducing the cost of health care and to eventually balance the budget.

Interviewed on “The Morning Show” on WSTA Radio on Tuesday, Mapp said that there have been successful overtures to the Trump Administration in Washington to qualify more Virgin Islanders for health care coverage under existing federal programs.

The U.S. Department of Health and Human Services was convinced to raise the official poverty level in the Territory, which makes approximately 20,000 more residents eligible for coverage under Medicaid. DHHS also has agreed to the transfer of children from Medicaid and other family coverage plans to the Children’s Health Insurance Program (CHIP), thus freeing up more Medicaid funds for adult coverage, and allowing households meeting the new poverty level guidelines to transfer children from private family plans, including the local government’s subsidized CIGNA plan.

Under CHIP coverage, the federal government pays 91.5 percent of healthcare cost for children from birth through 19 years. Not only will more residents be covered, the governor said, but the $30 million annual hospital losses for uncompensated care will be reduced significantly, and the burden eased on the General Fund to subsidize their operations.

“The community must realize that we can spend only what we collect,” Mapp said.

Mapp said that he believes that his administration and the public can take pride in the fact that the government, despite its inability to borrow operating capital, continues to maintain employment levels, provide services, and invest in economic growth.

“This latest legislative proposal also is designed to save the Government Employees Retirement System,” he said.

The governor said that he has pledged to the Legislature and the people of the Virgin Islands his administration’s commitment to working with Senators to implement important changes required to achieve fiscal balance.