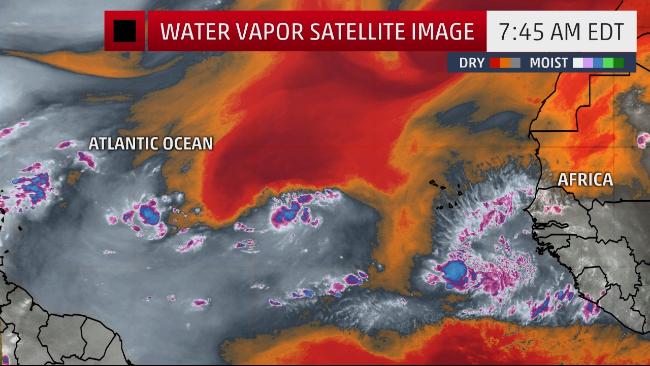 MIAMI — A series of tropical waves in the eastern Atlantic Ocean may develop into the next tropical depression or tropical storm in the Virgin Islands by Friday — and Puerto Rico by Saturday.

The first area being monitored has been named Invest 91L by the National Hurricane Center (NHC).

The term “invest” is used to identify features that have a chance to develop into a tropical depression or tropical storm.

The westernmost disturbance, Invest 91L is a poorly-organized area of thunderstorms still several hundred miles east of the Lesser Antilles.

A second disturbed area, with somewhat better-organized thunderstorms and at least some spin a few hundred miles east of Invest 91L, has been dubbed Invest 92L.

These two disturbances may have difficulty getting their act together.

Instability for generating thunderstorms between the Lesser Antilles and west Africa is running below average for mid-August.

Fresh, dry air known as a Saharan Air Layer (SAL) is pouring in north of each disturbance right now, and may ultimately mix in with the disturbances, preventing thunderstorms from persisting and clustering.

Finally, wind shear, the change in wind direction with height, is stronger over and just to the east of the Lesser Antilles, according to an analysis from the University of Wisconsin, and may pose a challenge particularly for Invest 92L.

This hostile wind shear that rips apart tropical disturbances and weaker tropical cyclones will have to weaken or retreat westward for either of these systems to have a chance to develop.

The NHC is also watching another area in the tropical Atlantic for development.

Namely, a tropical wave is emerging off the west African coast, well east of the other disturbances, kicking off its journey across the eastern Atlantic Ocean.

This latest wave may develop by the weekend, but won’t near the longitude of the Virgin Islands until Monday with the chance it could track up on the path the total solar eclipse tracked down on.

What form that system takes – tropical wave, depression, storm or hurricane – and where it exactly tracks remain unknown at this time, though the majority of forecast guidance suggests this system will track north of the Leeward Islands.

To read more about the possibility of 91L intersecting with the path of the total solar eclipse, as was first reported in the territory by the Virgin Islands Free Press on Tuesday, please click on the link below: 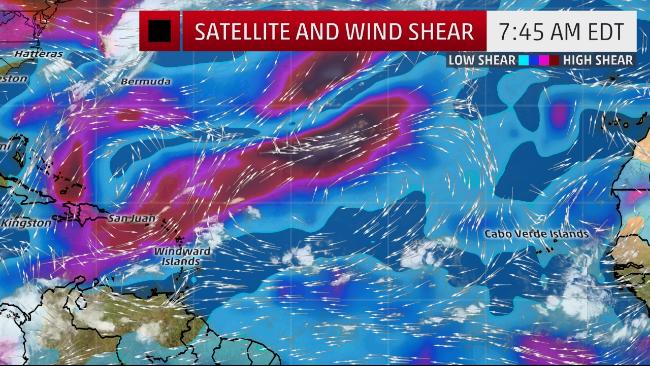 Fitch Ratings, One of Three Major Credit Rating Firms, Brings Territory Down Three Notches With The Promise It Will Sink Lower ... Soon

Dominica Native Kenneth James Makes His Initial Appearance In Federal Court On Charges He Tried To Move 26 Pounds Of Cocaine In St. Thomas