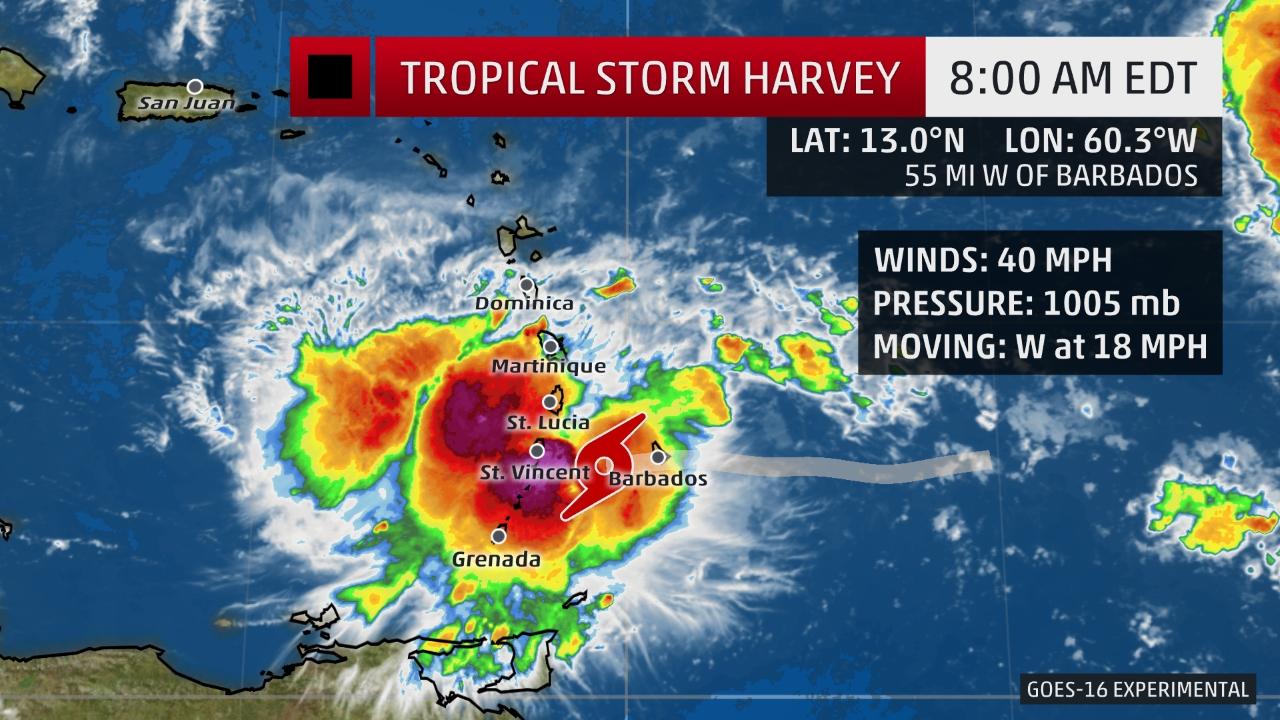 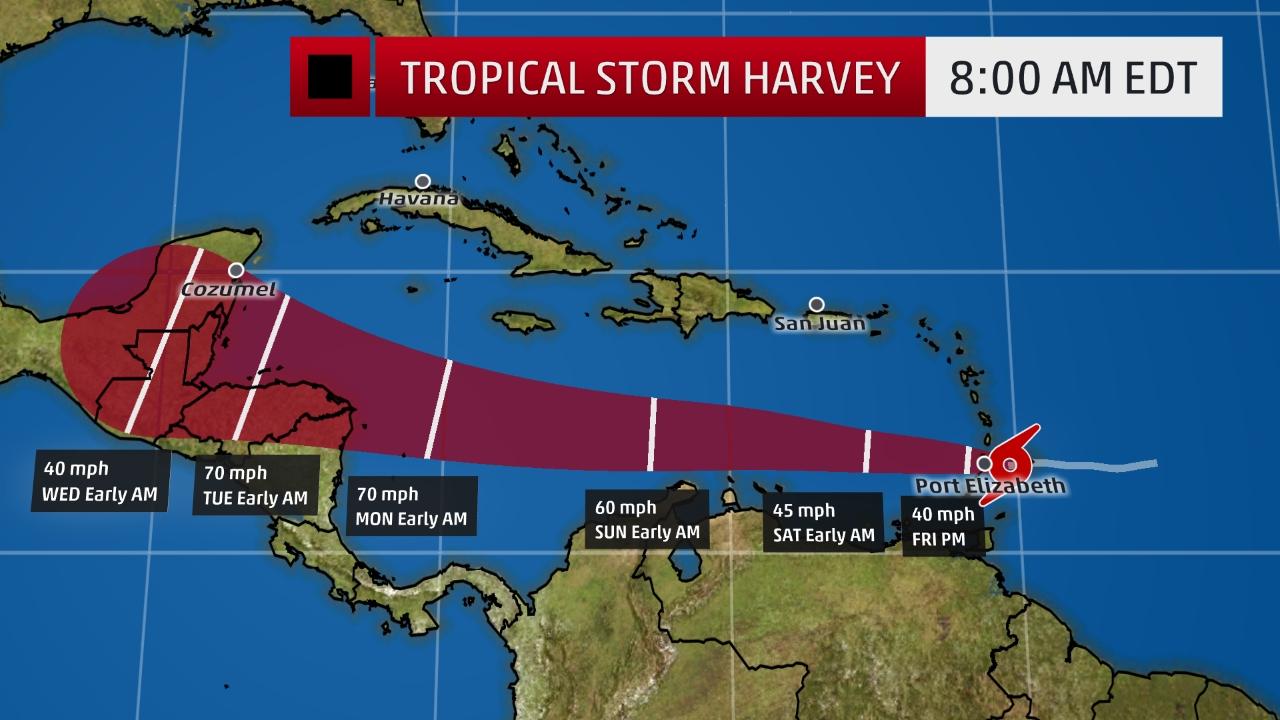 MIAMI — Tropical Storm Harvey is starting to cast down rain on the Windward Islands, and may pose a threat early next week in parts of Central America’s Caribbean coast, but is not expected to adversely affect the Virgin Islands and Puerto Rico.

The good news is that Harvey hasn’t gotten any stronger as of this morning.

As of the last advisory from the National Hurricane Center at 8 a.m. AST, Tropical Storm Harvey was located about 55 miles west of Barbados and was moving to the west at a brisk 18 mph.

Harvey, the eighth named storm of 2017 in the Atlantic, had sustained winds of 40 mph, making it a minimal tropical storm.

Tropical storm warnings have been issued for parts of the Windward Islands, including Martinique, St. Lucia, Barbados and St. Vincent and the Grenadines. Warnings are issued when tropical storm conditions are expected within 36 hours.

A tropical storm watch is in effect for Dominica, where those conditions are possible within that time frame.

Tropical storm conditions, with winds of 39 mph or greater, are expected to first reach the Lesser Antilles within the warning area by late Friday morning, making outside preparations difficult or dangerous.

Thunderstorm activity over the storm has not changed much since a Thursday afternoon hurricane hunter flight found winds of 40 mph.

Another mission is scheduled into Harvey on Friday morning to see if anything has changed in the storm.

Harvey will bring 2 to 4 inches of rain across the Windward Islands from Martinique southward to Grenada, which could trigger life-threatening flash flooding and mudslides in mountainous terrain.

After that, the system will then track westward through the rest of the Caribbean Sea, and will likely pose a threat to parts of Central America and/or Mexico’s Yucatan Peninsula early next week.

It’s not clear how strong this tropical storm will become through its Caribbean trek, due to potential interaction with dry conditions and sinking air. Interests throughout the Caribbean should monitor the progress of Harvey through early next week.

At this time, Tropical Storm Harvey is not a threat to the United States.

Invest 92L continues to fester a few hundred miles to the east of Harvey.

This invest has shown signs of strengthening through early Friday, and could become a tropical depression later today or over the weekend.

A fresh surge of such dry air, known as the Saharan Air Layer (SAL), is pushing towards 92L right now. This dry air may mix in with the disturbance, preventing thunderstorms from persisting and clustering.

And if 92L tracks farther north, as expected, wind shear – the change in wind direction with height – is stronger to the north of the Leeward Islands, according to an analysis from the University of Wisconsin.

This hostile wind shear that typically rips apart tropical disturbances and weaker tropical cyclones may inhibit 92L from developing significantly, if it gains enough latitude north of the Leeward Islands this weekend. 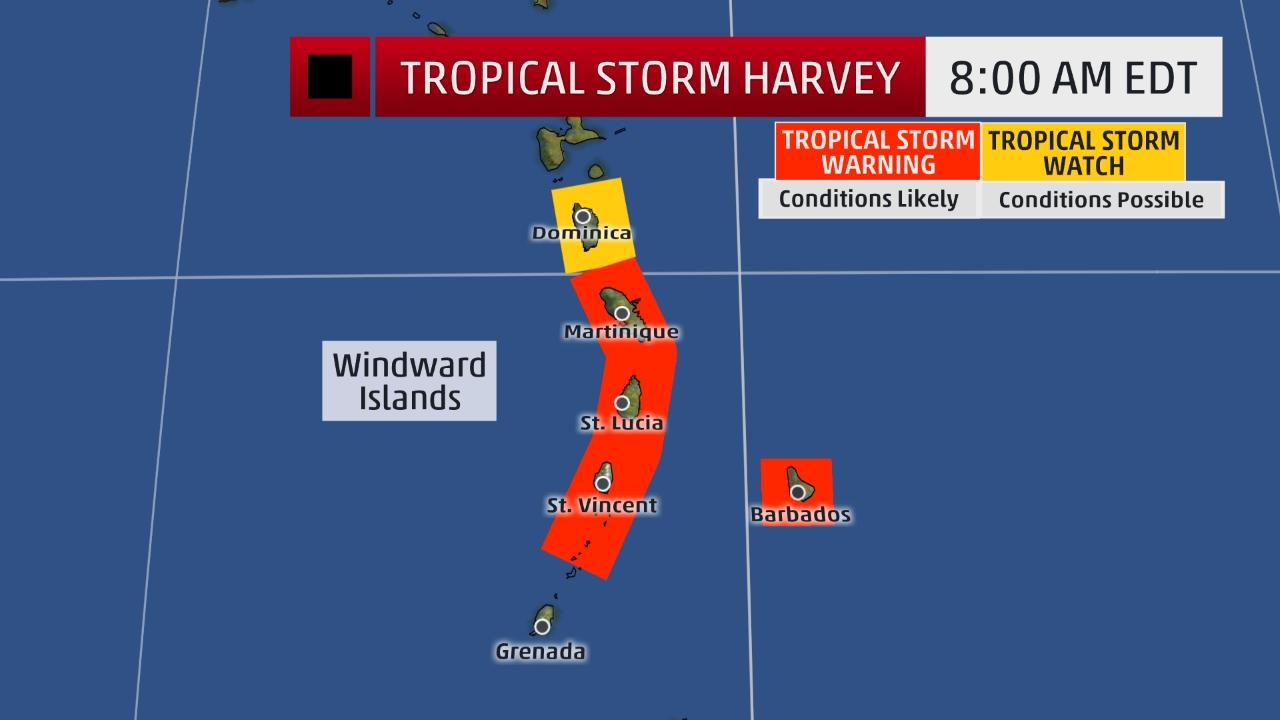 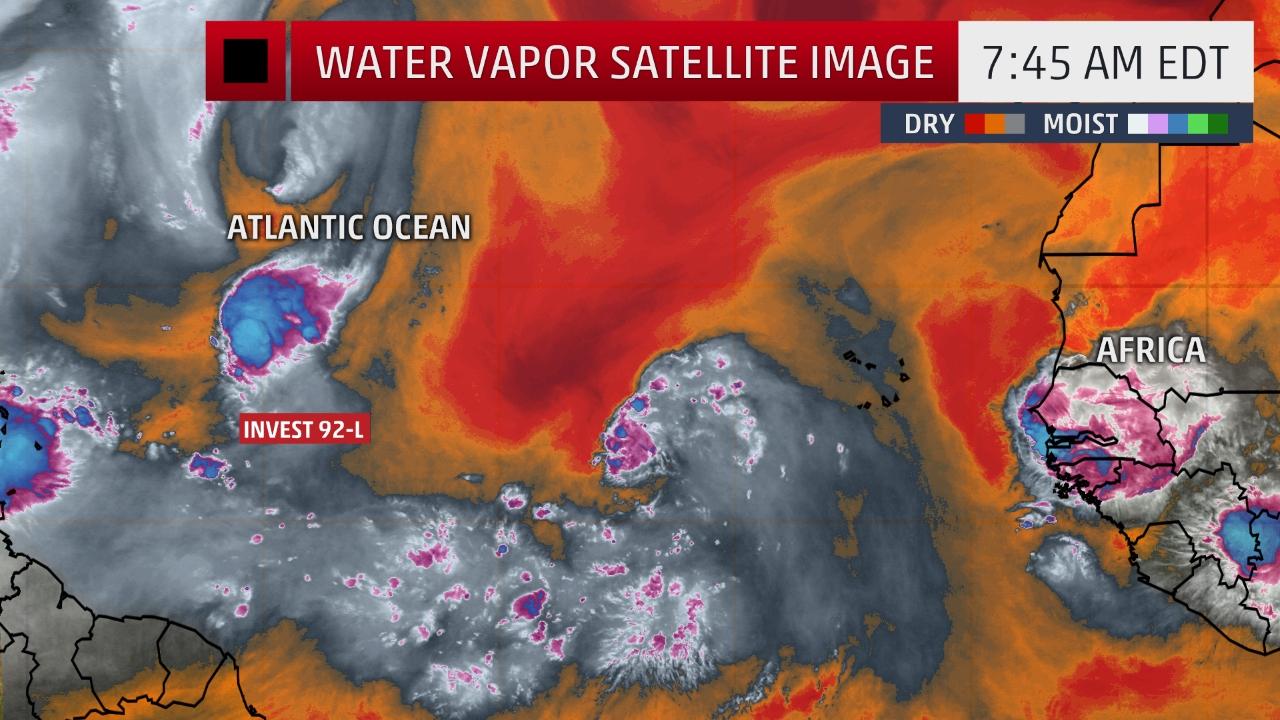