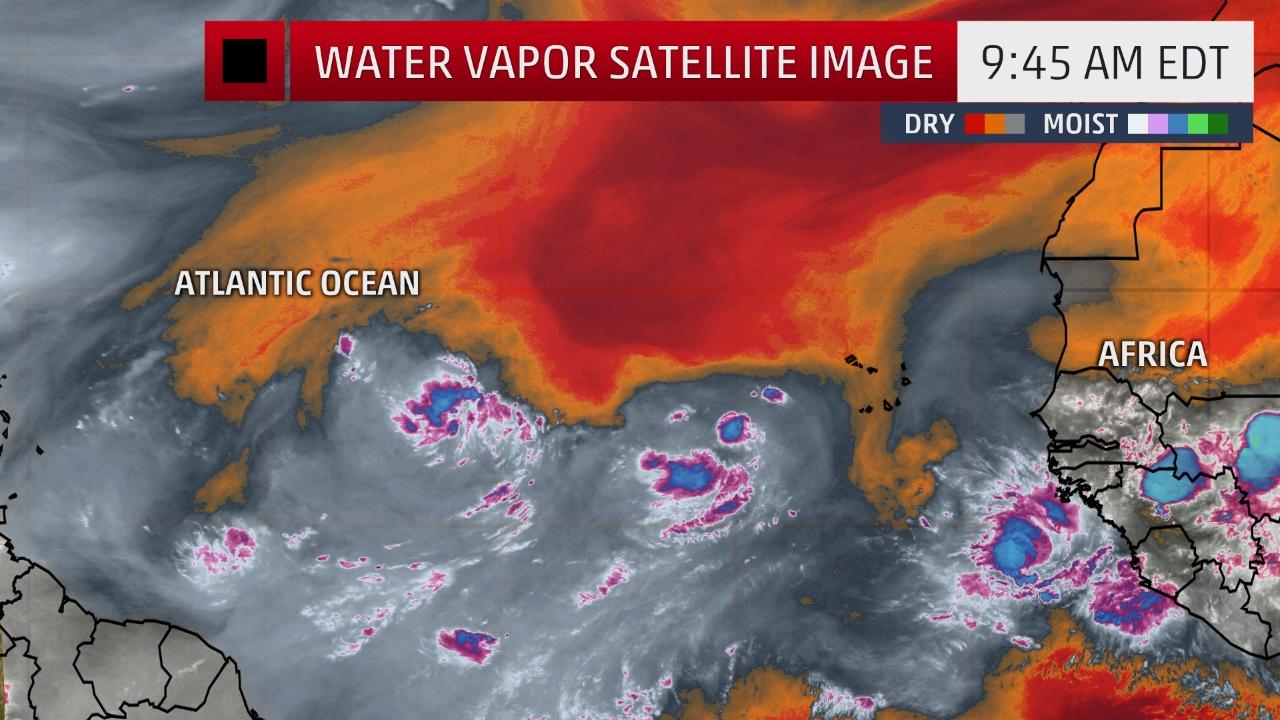 MIAMI — The National Hurricane Center said this morning that it is watching three tropical waves for possible storm development in the Virgin Islands and Puerto Rico later this week.

The weather pattern is called Invest 91L and was given a 40 percent chance of becoming a tropical cyclone over the next five days, with forecasters expecting conditions to be less favorable as it crosses into the Caribbean Sea on Friday.

Invest 91L is a poorly-organized area of thunderstorms about half way between the west African coast and the Lesser Antilles.

For now, the NHC has given this system a medium chance of development during the next five days. That system had been given a 60 percent chance of formation in the 2 a.m. advisory.

The term “invest” is used to identify features that have a chance to develop into a tropical depression or tropical storm.

A second disturbed area is immediately to the east of Invest 91L.

Having said that, these two disturbances may have a difficult time getting their act together.

Instability for generating thunderstorms between the Lesser Antilles and west Africa is running below average for mid-August.

Fresh, dry air known as a Saharan Air Layer is pouring in north of each disturbance right now, and may ultimately mix in with the disturbance, preventing thunderstorms from persisting and clustering.

Finally, wind shear, the change in wind direction with height, is stronger over and just to the east of the Lesser Antilles, according to an analysis from the University of Wisconsin.

The two other areas associated with tropical waves were each given a 20 percent chance of becoming tropical cyclones in the next five days.

If one gains tropical storm status, it would be named Harvey.

The NHC is also watching another area in the tropical Atlantic for development.

Namely, a tropical wave is about to emerge off the west African coast Wednesday, well east of the other disturbances, and then will begin its journey across the eastern Atlantic Ocean.

This latest wave may develop by the weekend, but won’t near the longitude of the Lesser Antilles until early next week.

But the V.I. Freep 2017 Tropical Storm Watch team says to watch this third system as it may intersect with the Caribbean path of the total solar eclipse (coming in the opposite direction) sometime on Monday.

What form that system takes: tropical wave, depression, storm or hurricane and where it exactly tracks remain unknown at this time.

This hostile wind shear that rips apart tropical disturbances and weaker tropical cyclones will have to weaken or retreat westward for either of these systems to have a chance to develop.

We are in the climatological peak of the hurricane season, so each tropical wave or area of low pressure in the Atlantic Basin must be watched closely for development.

As an example, the disturbance that formed into Gert to the northeast of the Bahamas over the weekend was tracked for nearly 10 days before it finally developed. That tropical wave also originated over Africa.

But not all tropical waves or low-pressure systems that emerge from Africa become tropical depressions or tropical storms, but they are all monitored closely, particularly when atmospheric conditions are ripe for them to spin up. 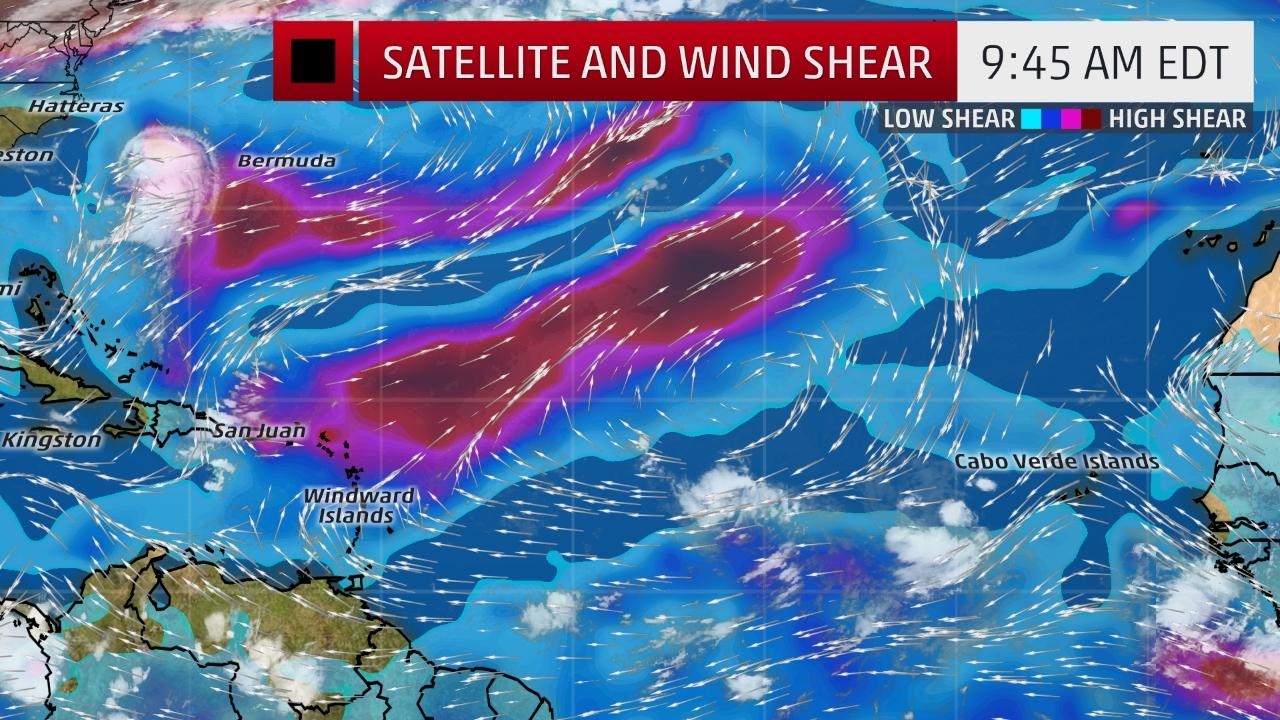 SATELLITE AND SHEAR OVERLAY: Areas of clouds are shown in white. Areas of strong wind shear, the difference in wind speed and direction with height, are shown in purple. High wind shear is hostile to mature and tropical cyclones and those trying to develop. 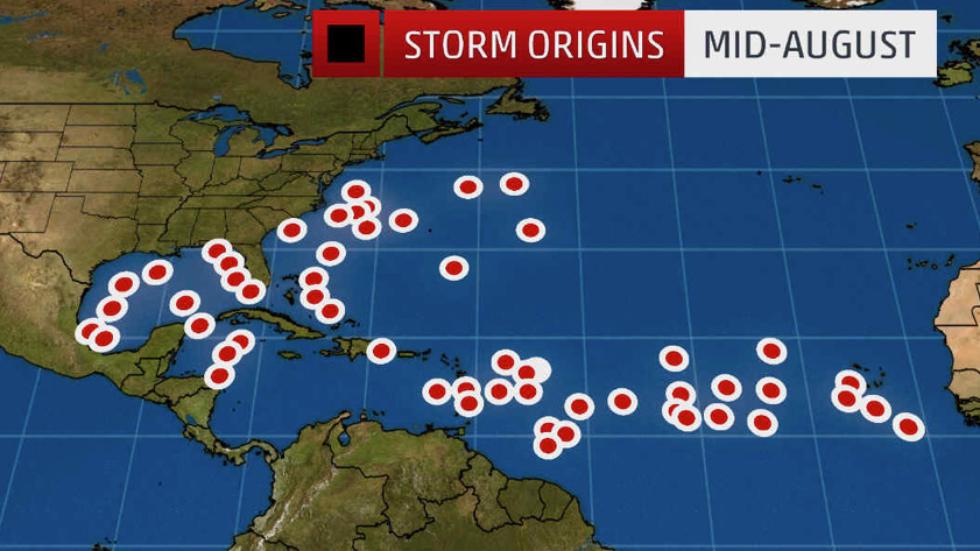 WHERE THEY START AROUND AUGUST 15: The red dots represent where named storms have developed in the Atlantic during mid-August.

St. Croix Man Atnelle Livingston Harris, A Relation To Lyana Serieux And Her Family, Shot To Death Near Mutual Homes On Sunday