IRMA-GEDDON! In The USVI, St. John Got The Worst of it from Hurricane Irma, And It Will Take At Least 10 Years To Recover 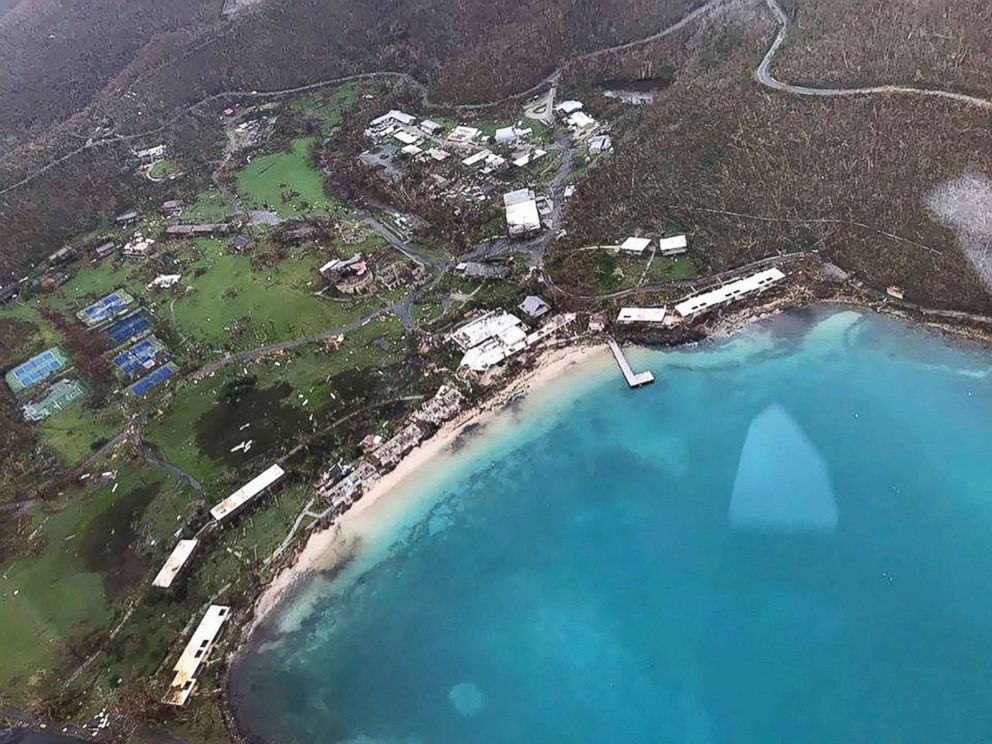 CRUZ BAY — The Asolare restaurant is gone, practically blown off its cliff, along with its world-famous carrot ginger soup.

The facade of Margarita Phil’s is a junkyard of yellow and vermilion planks.

On St. John, that was only Irma’s beginning.

Once a lush gem in the territory, a chain steeped in the lore of pirates and killer storms, this 20-square-mile island is now perhaps the site of Irma’s worst devastation on American soil.

Six days after the storm — some say several days too late — St. John finally has an active-theater disaster zone.

Military helicopters buzz overhead and a U.S. Navy aircraft carrier is anchored off the coast, as the National Guard patrols the streets.

The Coast Guard is ferrying the last of St. John’s dazed tourists to large cruise ships destined for Miami and San Juan, Puerto Rico. More than a few locals, cut off from the world with no power, no landlines and no cellular service — other than the single bar you might get above Ronnie’s Pizza — are leaving, too, some of them in tears.

The streets of Cruz Bay, the largest town of this island of roughly 5,000, were a bizarre tableau of broken businesses and boats on sidewalks.

Beyond belief, the Dog House bar had not only a generator but satellite TV, and folks streamed in and out, some stepping over debris holding beers. A drive up formerly picturesque mountain roads reveals a landscape of such astonishing devastation that it looks as if it were bombed. Entire houses have disappeared. Others are tilting on their sides. Horizons of waxy-green bay leaf trees on jade-colored hills have turned to barren wastelands, as if the world’s largest weed whacker had hedged the entire island.

“Hurricanes? We’ve been through hurricanes — lots of them. But nothing, nothing, like this,” said Jerry O’Connell, a Chevy Chase, Md., native turned St. John developer.

And that’s just damage from the weather.

In the days following the storm, lawlessness broke out — here and on other Caribbean islands. Thieves hit a string of businesses. Houses were burgled, entire ATM machines stolen.

In the information vacuum after the storm, rumors flew like Irma’s raindrops. Prisoners had broken free on nearby Tortola, in the British Virgin Islands, seized guns and formed armed gangs.

Left largely unprotected and with no way to call the police, some locals began sleeping in shifts. One local blogger, Jenn Manes, called for help on her island blog — help that finally arrived in force Monday. Others jumped on her for sullying the island’s name, because tough times can bring communities together, but they can also divide.

“I know some people were not happy with my telling the truth — that I was scared, that people here were scared,” said Manes as she lined up Tuesday to catch a Coast Guard boat off the island. “It doesn’t mean I won’t be back. We’re going to rebuild.” On late Wednesday morning when Irma hit, the Virgin Islands, a haven for cruise ships and those in search of a good piña colada, were supposed to get lucky. A former Danish colony purchased by the United States in 1917, the small island cluster had had more than its fair share of cyclones. Their names read like a litany of salty villains: Marylyn, Irene, Hugo.

Irma was supposed to veer to the north, or so thought Joe Decourcy, a Canadian businessman who moved to St. John in 2001. Instead, the storm slammed the island at full intensity, its Category 5 winds of 150 mph racking it from coast to coast. Irma also hit neighboring St. Thomas, devastating the local hospital and homes and businesses across the island.

In the territory, only St. Croix was largely spared.

Decourcy, owner of Joe’s Rum Hut, holed up that night in the formidable villa of a friend. Even the multimillion-dollar home could not hold Irma back. They sheltered on the first floor after second-floor windows were sucked out, causing massive flooding.

“The pressure was insane. It felt like our heads were going to explode,” he said.

When the slow-moving storm cleared, Decourcy emerged with other shell-shocked locals to post-apocalyptic scenes of shattered homes, of cars, boats and sides of homes in the street. “We walked around like ‘The Walking Dead,’ ” he said.

A sailboat named Windsong had landed in the street in front of Joe’s Rum Hut. Islanders quickly banded together, he said, sharing food, supplies. But by Friday, the “vibe,” he said, “started to change.”

The island was virtually cut off. No cell reception. No power. No WiFi. It also meant there was no way to call the island’s police, and some began to realize it.

Friday morning, Decourcy arrived to start cleaning up in earnest, only to discover the chains to the bar had been cut by bolt cutters. Inside, the registers were smashed open, the safes ajar. He had banked the bar’s cash before the storm. But who knew what else was missing — he did not have the stomach to do an inventory.

At least four other businesses in a mall he runs also were hit. A gas station was robbed, as was Scoops, the island’s ice cream parlor. The burned-out husk of an ATM and safe, which thieves apparently tried to open with a blowtorch, sit in the town’s police station.

Many residents were outraged it took so long for the National Guard to arrive.

“No structure, no police presence, no National Guard,” Decourcy said. “It got really tense, to the point where business owners were asking, ‘How do I get firearms? How do I get off the island? Are they coming for us?’ I mean, this is supposed to be U.S. territory. And yet people were just running around breaking into residences and stores.”

Devida Damron, 38, a 10-year island resident who works at the local veterinary clinic, was leaving St. John on Tuesday with her boyfriend and her dog, French Fry. She said she saw a man with a machete in the street Friday yelling, “It’s looting time.”

At the same time, a cluster of do-gooders, mostly launching from the Puerto Rican coast, were starting to ferry the old and infirm off St. John. Nils Erickson, a 42-year-old Gaithersburg, Md., native and part time St. John resident, rushed down Friday after he began hearing pleas from islanders on a Facebook page.

“People were begging for help,” he said.

With the aid of a local boat company, a GoFundMe account and credit cards to finance the rest, Erickson began running supply mission and evacuations. Since Friday — three days before large-scale official efforts — they managed to get 600 people off the island.

So many boats came to aid that the locals began to call it the “Puerto Rican Navy.”

“It was our own Dunkirk,” said Sgt. Richard Dominguez of the Virgin Islands Police Department. “They took their own boats before official means were available. They didn’t wait.”

Kenneth Mapp (I), governor of the U.S. Virgin Islands, insisted in a telephone interview that there had been no pillaging at all on St. John, despite evidence to the contrary.

“I am sympathetic, and I understand the people’s fear and desire for more resources on the island as quickly as possible,” Mapp said. “But there was no looting, no abuse of folks.”

President Trump, Mapp said, called him Monday and was due to survey the Virgin Islands damage this week. He would find, the governor said, an efficient response. Those in dire need of assistance were carried off St. John and St. Thomas by authorities via helicopter. On Monday and Tuesday, the bulk of stranded tourists — some 3,500 — were rescued by two massive cruise ships. And the emergency WiFi service was up and running Tuesday night.

Mapp conceded that it may take “months, months, months” before power is restored to the island but said the delay in mobilizing the National Guard to St. John was unavoidable. The harbor was filled with overturned boats, making landings difficult. He managed to get to the island himself, he said, via helicopter.

“It’s a matter of deployment of assets,” he said. “This was a Cat-five event.”

And yet, the citizens here are indeed pulling together. The Dog House is offering free food. Meaghan Enright, 34, a marketing manager on the island who suddenly finds herself jobless, has found a new reason for being the de facto relief organizer.

“St. John has a singular ability to pull together in a crisis,” she said. 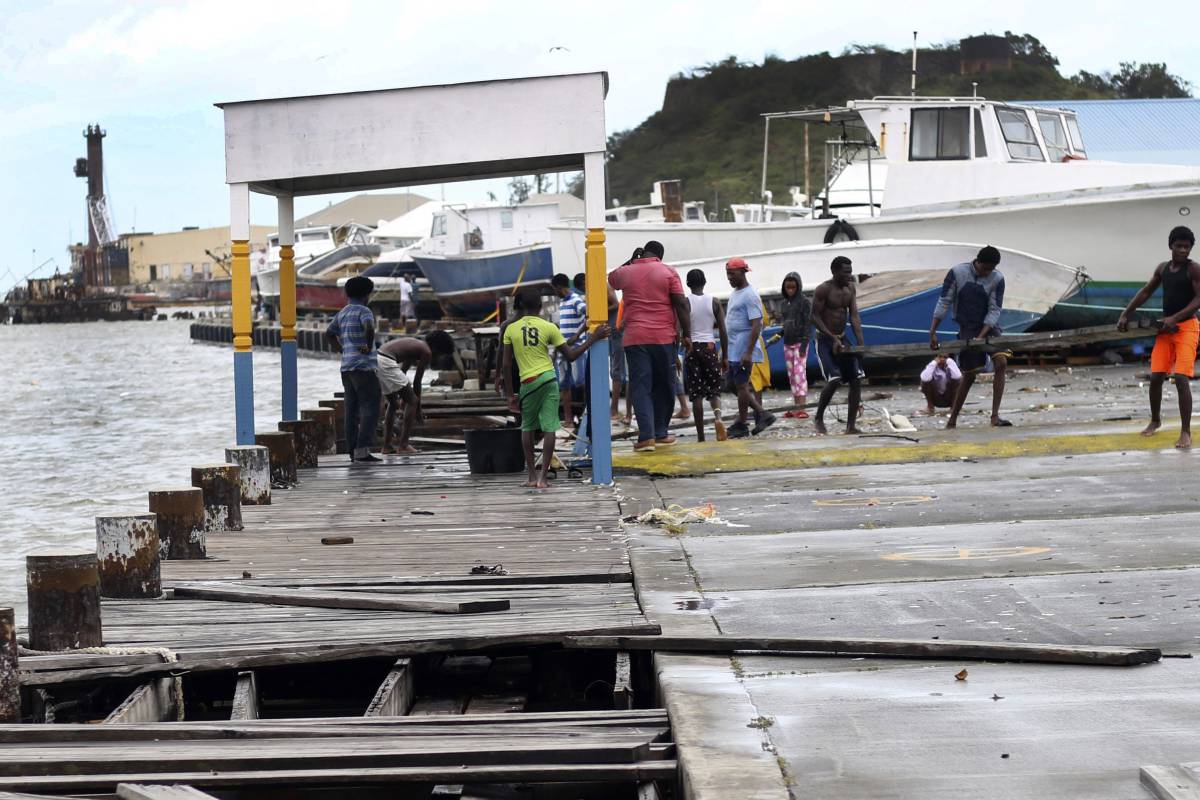 MAPP THE JINX! While The Virgin Islands Remains Without WAPA Power, The United States Is Seething At the Territory For The Governor's Intemperate Comments: Hurricanes Marilyn And Irma Happened On Mapp's Watch

Hurricane Irma Recovery For St. Thomas and St. John Residents Sticking It Out: The Waiting Is The Hardest Part

IRMA-GEDDON! In The USVI, St. John Got The Worst of it from Hurricane Irma, And It Will Take At Least 10 Years To Recover