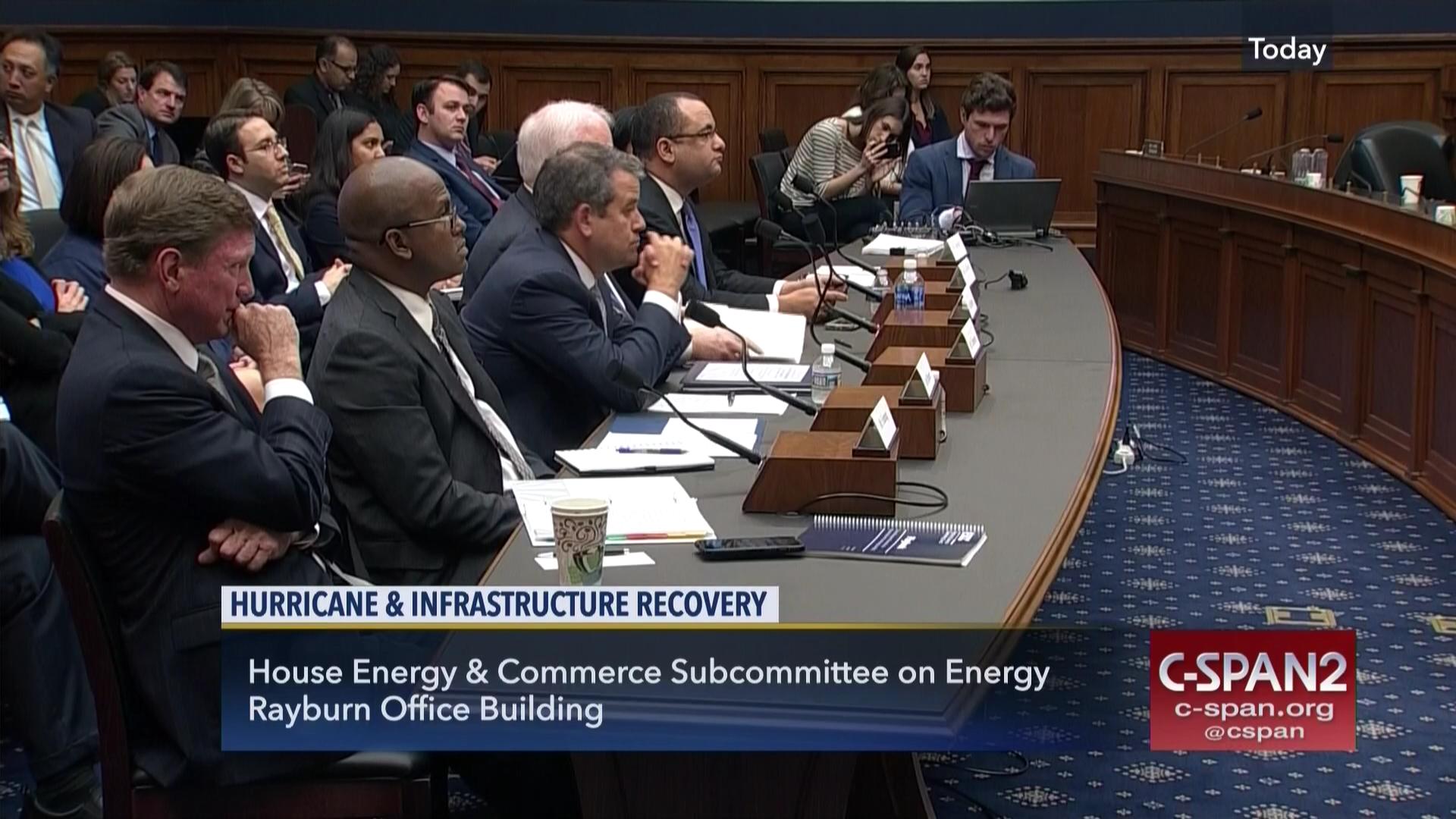 WAPA CEO Julio Rhymer said that because of inequities in the way federal Medicare and Medicaid are calculated in the territory and the fact that the hospitals cannot be cut off for non-payment, the health care facilities have used not paying WAPA as a way to make up for budgetary shortfalls.

“So they just decide not to pay the bill?” an incredulous House Energy Committee member asked.

Gov. Kenneth Mapp also testified and supplied a bleak view of the situation in St. Thomas, St. John and St. Croix, urging Congress to alter the way in which it allocates medical and storm reduction funds to the territories.

Some Democratic Senators also offered support for long-sought changes in Medicaid and Medicare for the territory that could mean tens of millions of dollars or more in annual funding to the territory’s hospitals.

Under the federal Stafford Act, funding is limited to rebuilding infrastructure to what it was before whatever disaster has damaged it. While rebuilding is nearly automatic, the law would have to be changed to spend more money to put electrical wires underground or to install much more robust carbon fiber utility poles.

“We all agree it makes no sense to rebuild these grids to their previous state as the Stafford Act requires,” committee chair Sen. Lisa Murkowski (R-Alaska) said at the beginning of the hearing.

“Congress needs to provide greater flexibility” in how the Stafford Act can be used to fund electrical grid repairs, she said.

Only 30 percent of residents have electrical energy after Hurricanes Irma and Maria pounded the islands, Mapp said.

Additionally, nine public schools and two hospitals have been destroyed, making the case for $7.5 billion in funding.

“Today, critical care is unavailable in the U.S. Virgin Islands,” Mapp said. “Critical patients and persons requiring dialysis must be flown to the U.S. mainland for care.”

Families have to live in their vehicles to keep from getting soaked in houses with no rooftops or partitions, he added.

“With each rainfall, families are being harmed,” Mapp said.

The governor of Puerto Rico and the chief executive of its beleaguered electric company faced hours of questioning on Tuesday in Congress, where skeptical legislators questioned whether to give the island an enormous aid package on the heels of a botched high-priced contract to fix its power grid.

Gov. Ricardo Rosselló came to Senate and House committees with a huge ask: $94.4 billion to help Puerto Rico “build back better” after Hurricane Maria destroyed or damaged 472,000 homes and knocked out the island’s electricity. He also said that Puerto Rico should have more authority over its own fiscal affairs, and that he had “zero role” in awarding a highly-criticized $300 million deal to a small Montana firm to help restore power.

“If we get more resources to rebuild, people will come back to rebuild stronger,” the governor said, alluding to the thousands of Puerto Ricans who have already left for Florida.

In a report submitted to Congress, Rosselló requested $15 billion for health care, without specifying what medical facilities needed to be fixed. He said the island needed another $8.4 billion for schools, without noting what damages the schools had incurred. The power grid, he said, needs $17.7 billion.

Rosselló spent a second day on Tuesday pushing for legislators to increase funding for hurricane relief aid — the island is asking for nearly $95 billion — but what lawmakers largely focused on was the now-canceled contract the island signed with a small Montana firm to help rebuild the island’s electric grid.

But before the hearing, documents sent to the committee by the Puerto Rico Electric Power Agency (PREPA) show that the utility company ignored advice from its own lawyers to include certain contractual protections, such as the ability to terminate the deal within 10 days for any company breach; that the company be required to hold a performance bond; or that there be predetermined rates for time and materials.

“A legacy of dysfunction (at PREPA) has created a competence deficit that threatens the Island’s ability to improve conditions for its citizens,” Bishop said in a statement. “Confidence in the utility’s ability to manage contracts and time-sensitive disaster related infrastructure work is long gone.”

Bishop stated that despite near “universal criticism” of the contract, the executive director continued to defend it for weeks until the governor ordered its cancellation.

“This lack of institutional control within Puerto Rico’s largest municipal debtor raises grave concerns about PREPA’s, and by association, the government of Puerto Rico’s ability to competently negotiate, manage and implement infrastructure projects without significant independent oversight,” Bishop stated, adding that the island’s “controversial decisions” may have made the crisis worse.

Bishop told Rosselló in Tuesday’s hearing that the island needs to close a “credibility gap” if it expects to see anywhere near the $95 billion it is asking for — “and I do believe you need the money.”

This was the second hearing in as many weeks where the committee focused on post-hurricane Puerto Rico, and while PREPA executive director Ricardo Ramos excused himself from testifying before the House committee last week, he appeared on Tuesday before the Senate Energy and Natural Resources Committee and he defended his initial decision to approve the Whitefish contract.

“After reviewing about a half-dozen proposals from potential first responders, we found that only two offered the immediate services that PREPA needed. One proposal required a guaranteed payment of $25 million, the other — from Whitefish — offered PREPA the ability to pay only for work that was completed (and mobilization/demobilization),” Ramos told the committee.

“I therefore authorized our contracting staff to execute a contract with Whitefish while we continued to seek additional assistance from others for the complete, multibillion dollar restoration effort still to come. In retrospect, there are some steps in our contracting process with Whitefish that we could have done better. I chose to contract with Whitefish because my priority was securing the immediate assistance that we needed to begin restoring power as quickly as possible to our most critical customers.”

Several lawmakers, however, appeared perplexed that the island did not immediately seek to enter in a mutual aid agreement with stateside utility companies that would repair and restore power at cost instead of agreeing to the much higher costs incurred in the Whitefish contract, including Whitefish paying linemen more than $60 an hour but charging the island government more than $300 an hour.

“Everybody in the world was calling offering to help. This is a great injustice to the U.S. taxpayers that Puerto Rico went with a company that chose to gouge the U.S. taxpayers,” said Sen. Maria Cantwell, D-Wash. “I think if you would have asked the federal government should we pay these rates, I guarantee they would have said no.”

In addition to Congress, the Government Accountability Office and the FBI are investigating details of the contract.

Representative Garret Graves (R-Louisiana), requested why Congress ought to pay a lot for Puerto Rico, when Puerto Ricans are exempt from most federal revenue taxes.

Legislators additionally needed solutions about Whitefish Energy Holdings, the agency that received a contract with steep markups that a number of members of Congress described as “price gouging.” The Federal Emergency Management Agency distanced itself from the contract and the federal government was compelled to cancel it after a public outcry.

Ramos instructed the Senate Energy and Natural Resources Committee that he had employed Whitefish as a substitute of enlisting the assistance of different utilities beneath mutual help agreements as a result of he didn’t have sufficient provides for even his personal crews.

“We had no fuel, no phone, no internet. No nothing,” Ramos stated. “How could I bring more people into that situation?”

Whitefish was a contained unit with its personal satellite tv for pc telephones and tents, he stated.

However, in emails launched Monday between PREPA and Whitefish, it was clear that the Montana firm had additionally struggled with housing and logistics, and that PREPA was in a position to accommodate them.

In an electronic mail trade between the chief government of Whitefish, Andy Techmanski, and PREPA, Whitefish requested lodge rooms for his staff, and the utility offered 60 rooms for them. Whitefish had hassle bringing in supplies, and wanted assist from each the Jacksonville Electric Authority and PREPA with logistical issues that have been stopping the corporate from getting the work accomplished.

“We have 60 rooms at Verdanza hotel reserved to accommodate your first wave,” wrote Ramón Caldas Pagán, a senior supervisor at PREPA, in an electronic mail response to Mr. Techmanski. “We need to know what are your needs to transport your equipment as soon as possible.”

At the hearings, Ramos instructed that the procurement workplace and authorized division at PREPA have been guilty, and insisted that there had been no corruption. “I don’t know of anyone being offered a kickback,” he stated.

The data have been launched by the House committee, which is in search of to strengthen the authority of the fiscal oversight board that manages Puerto Rico’s funds.

The paperwork confirmed that Puerto Rico’s electrical firm disregarded its personal attorneys’ recommendation when it signed the contract. The settlement supplied so few protections that it allowed some staff to invoice for “nearly every waking hour” they have been on the island, in keeping with the House panel investigating the deal.

A evaluation confirmed the corporate was paying some subcontractors about one-seventh what it billed PREPA. The contract referred to as for linemen to work 16-hour days and seven-day weeks at $319 an hour — 17 occasions the common wage of the Puerto Rican staff. But Ramos stated that five different bidders had supplied related charges.

PREPA’s attorneys had suggestions on the whole lot from how the contract could possibly be terminated to how the charges needs to be set. But the steerage was not adopted — and the ultimate provisions agreed to have been tilted within the Whitefish’s favor, the data present. Even PREPA’s personal threat administration officer had balked, as a result of he was by no means supplied the chance to judge the phrases, nor did the workplace obtain proof of insurance coverage.

“We are conscious of the urgency of the work to be done,” Sammy Rodríguez Ortega, a PREPA government worker, wrote in an Oct. 19 electronic mail to PREPA’s finance director and workers lawyer. “However, there are high risks associated with the scope of this work.”

The emails present lawyer for FEMA in Puerto Rico had additionally expressed considerations.

A spokesman for Whitefish, Ken Luce, stated the corporate would cooperate with Congress.

“Whitefish Energy continues to make progress on our assigned work to restore electrical transmission infrastructure on Puerto Rico and our team of more than 500 workers remains fully committed to this mission,” Mr. Luce stated in a press release.

The U.S. Army Corps of Engineers (CoE) is overseeing energy restoration efforts in Puerto Rico, however Rosselló stated the company was sluggish to ramp up its work. Nearly eight weeks after Hurricane Maria trampled the island and tore up the whole lot from transmissions towers to energy poles and miles of strains, the grid is producing simply 49 percent of its capability.

Under questioning from the committee, Ramos admitted that about 50 percent of the people working at PREPA are there because of political patronage, but not directly appointed by the governor.

No legislation was before the committee on Tuesday.