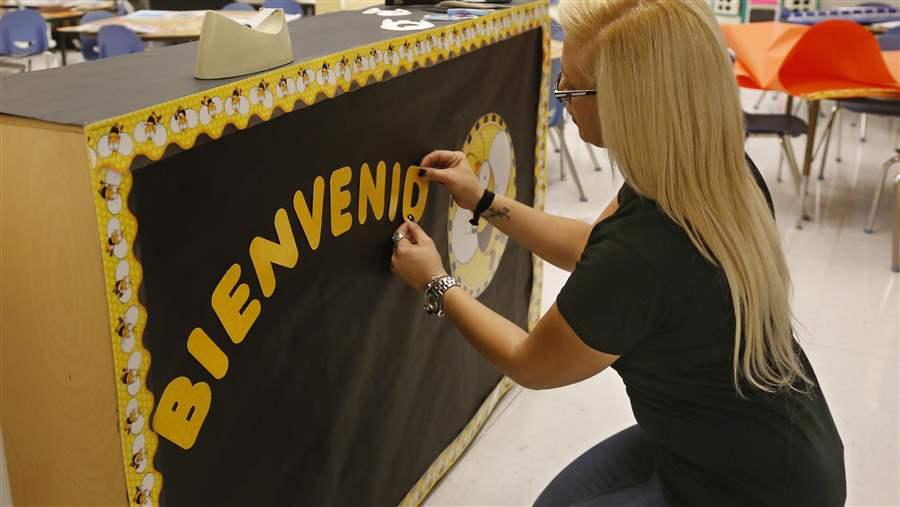 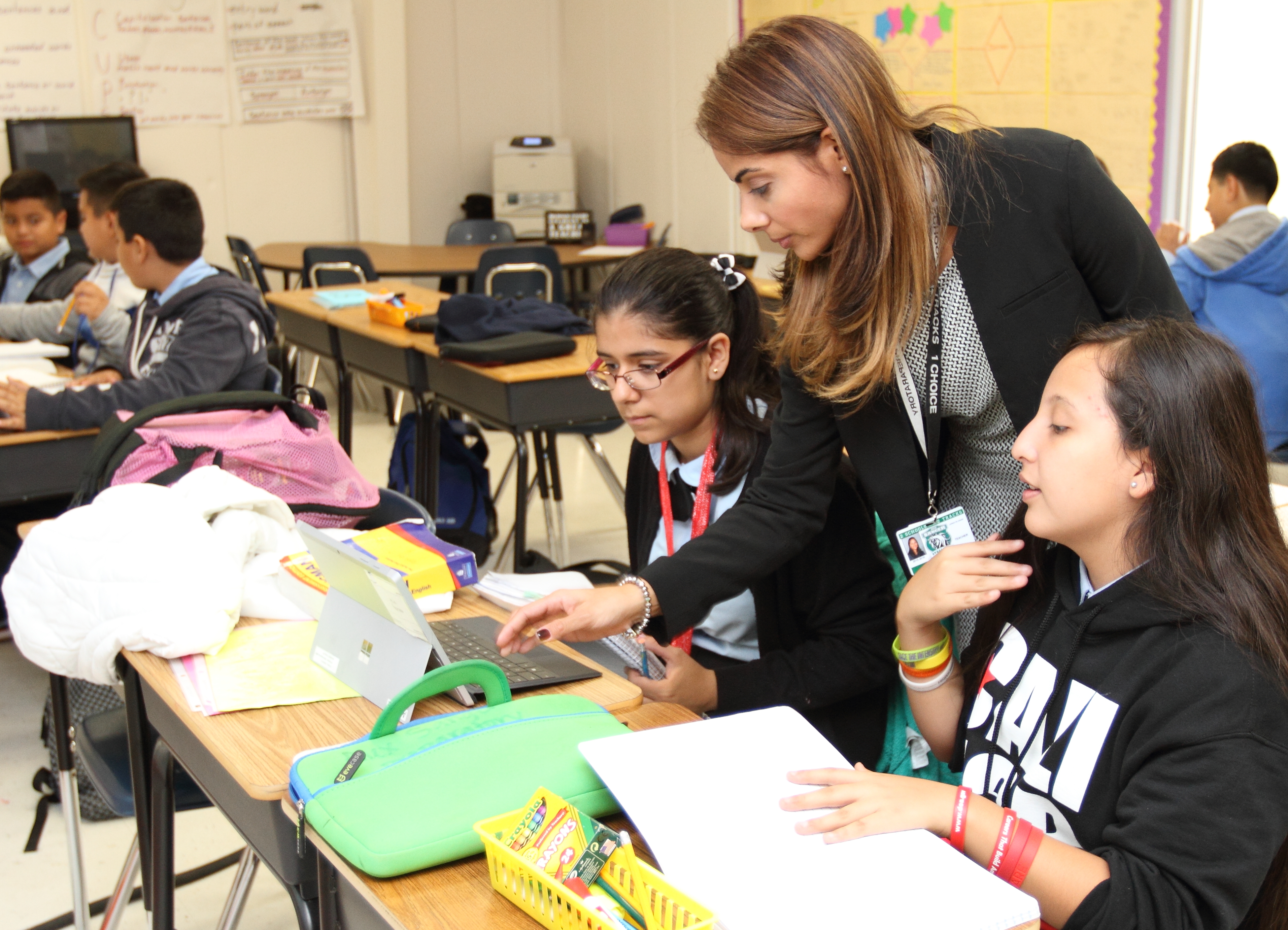 WASHINGTON — With many teachers among the thousands of residents fleeing Puerto Rico for the mainland after Hurricane Maria, school districts in Florida, Texas and New York say they are working to streamline the certification process in the hopes of adding Puerto Rican teachers to their classrooms. But for many of the teachers, the effort has hardly meant a quick ticket to employment.

Those states already have large concentrations of Puerto Ricans, and the numbers likely will grow as people displaced by the September hurricane come to the mainland to stay with family. Florida, for example, has seen 58,000 people from Puerto Rico land in Orlando and the Miami metro area since Oct. 3. At least 4,300 Puerto Rican children have enrolled in its schools, as have some 500 from the U.S. Virgin Islands.

School administrators in Florida say they are eager to hire Puerto Rican teachers, teacher’s aides, substitutes and bus drivers in a state where a teacher shortage will be compounded by a growing number of students. Just days after the hurricane made landfall, Sept. 20, several Florida school districts had set up booths at local airports to sign up students and recruit school staff.

“There’s a shortage of teachers within central Florida, and this is a great opportunity to try and recruit and hire folks who really reflect our student body in terms of being bilingual and being of Latino or Hispanic background,” said Greg White, recruitment specialist for Osceola County schools, south of Orlando. He said the district has openings for as many as 150 teachers throughout the school year and is desperate for bus drivers.

So far the district has hired five teachers who evacuated the island, he said. Several others are set to be interviewed.

Florida will waive the application fee for a teaching certificate and will accept unofficial transcripts in order to expedite the hiring of Puerto Rican teachers. In New York, the state is offering one-year teaching certifications for those with certificates from Puerto Rico and other U.S. territories who meet basic requirements for teachers.

But those actions may not be enough for Puerto Rican teachers who find they must take additional tests before they can work in the state. Many who came to the mainland years before the hurricane say this has long been a problem. Elementary school teachers in particular may face challenges because the island breaks up certification into two categories: kindergarten through third grade and fourth through sixth grade. This doesn’t perfectly align with Florida, which certifies teachers for either pre-K through third grade or all elementary school grades.

Glenyarid Melendez-Rivera, a 33-year-old English teacher from Orocovis, Puerto Rico, has been trying to get a job since she arrived in the Orlando area about two weeks ago. But her certification in elementary English doesn’t have an equivalent in Florida, and school officials told her she would have to take a $200 test in order to get certified as an elementary school teacher.

Florida Department of Education spokeswoman Audrey Walden said the state had no plans to adjust certification requirements or waive test fees at this time.

Melendez-Rivera thought she would get work fast given the state’s need for bilingual educators and for those who teach English as a foreign language. She left her husband in Puerto Rico and arrived with her 20-month-old daughter to stay with a cousin, under the assumption that she could land a job and get established before her husband joins them.

“They told me ‘in the meantime, you can apply for something noninstructional,’ like a teaching assistant or substitute teacher,” she said. “That’s fine, but it pays a third of what they pay teachers here. It’s even less than what I made over in Puerto Rico, so that’s a bit frustrating.”

So far, it’s unclear how much of an impact states’ efforts have had on Puerto Rican teachers. No teachers have yet applied for the temporary certificates in New York, according to state officials there. And Florida has documented just 20 Puerto Rican teachers who have applied for a certification fee waiver, though officials there say their records are likely incomplete since individual school districts handle hiring.

She has been lobbying Florida state legislators to reduce or waive fees on the tests some teachers will be required to take.

“If they could just get a temporary teaching certificate and job for just, say, a year, at least you’d have money to prepare for and take the test,” she said. “Because no one’s waiving that $200 test fee.”

White, in Osceola County, said it’s up to the state, not districts, to push for further changes to the certification process.

Elementary English teachers like Melendez-Rivera will be in the toughest spot as the state has no equivalent to that certification, he said.

“In our position,” she said, “we are encouraging teachers to stay in Puerto Rico.”

Teaching on the mainland remains a popular option for many, however, due to the island’s education struggles. In May, before hurricane season even began, the territory closed about 180 schools in part due to Puerto Rico’s budget crisis. Many teachers are unsure when schools that closed after Maria will reopen. Some have just begun to open, more than a month after the hurricane landed. And for many educators, particularly those who teach middle and high school students, the hiring process in Florida has been more straightforward.

Bridget Williams, chief of staff for Orange County Public Schools, the school district for Orlando, said officials have hired about 20 teachers and classroom aides, about 10 custodians, and a few others to work in school cafeterias since the hurricane.

“We’re talking about some very qualified people,” Williams said, adding that the district was lucky to be able to hire a husband and wife who used to teach at the University of Puerto Rico to teach high school chemistry and physics.

In Texas, the Dallas Independent School District has been recruiting Puerto Rican teachers for years. This year, though, the district had to cancel two recruitment trips because of Hurricanes Irma and Maria.

Jordan Carlton, manager of talent acquisition for the district, said his team has tried to contact 200 or so people who had signed up for the recruitment session that was canceled because of Irma. But the task was complicated by the island’s comprised infrastructure, and the district has yet to make any hires.

Because Puerto Rican teaching certificates do not directly transfer to Texas, Carlton said, the district has asked the Texas Education Agency to expedite the review process for their candidates, as they are wary of offering jobs to people before they get the proper credentials. Some may need to take additional tests, something Carlton hopes can be done in Puerto Rico once test centers reopen.

Texas Education Agency spokeswoman Lauren Callahan, meanwhile, said she had no details about the hiring process for Puerto Rican teachers across the state and that all hiring decisions are made at the local level.

Melendez-Rivera thinks state officials in Florida should be careful about how they advertise teaching opportunities.

“I don’t want the same thing that happened to me to happen to someone else,” she said. “It’s not as easy as they say.”