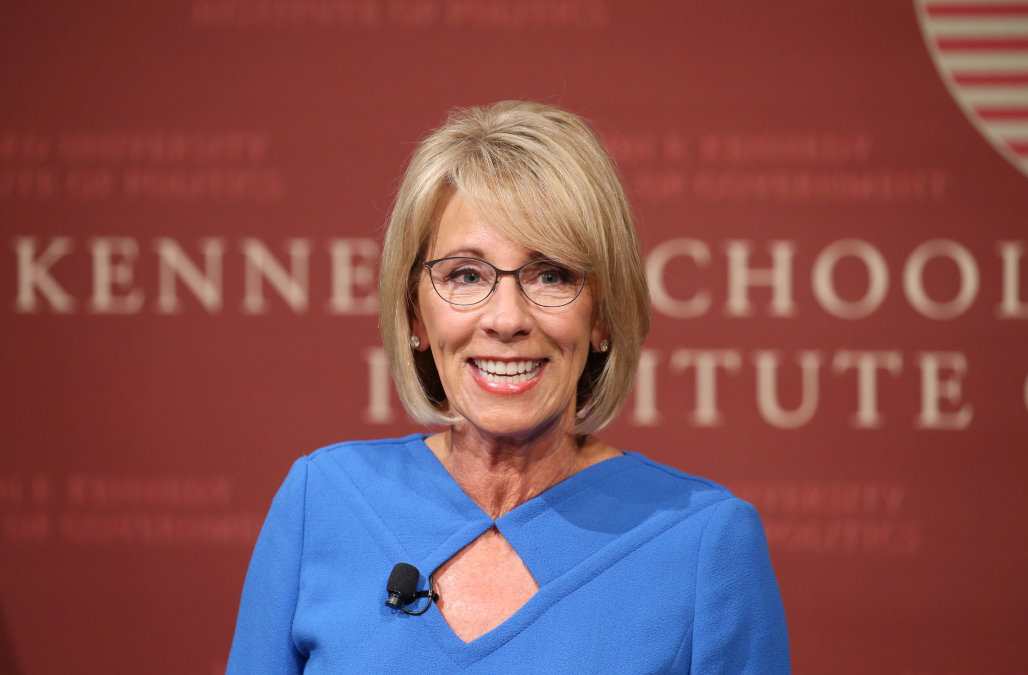 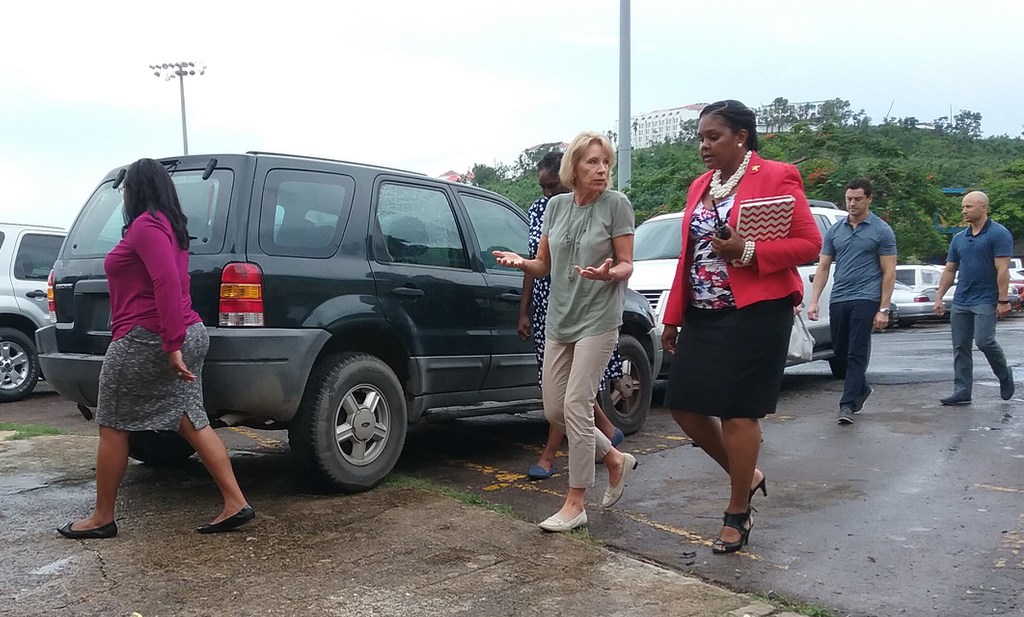 CHRISTIANSTED — Secretary of Education Betsy DeVos traveled to Puerto Rico and the Virgin Islands on Wednesday to observe the recovery and rebuilding efforts firsthand and to discuss with local leaders how the Department of Education can best assist in those efforts.

“My heart goes out to those in Puerto Rico and the Virgin Islands who have had their lives upended by the recent hurricanes,” said Secretary DeVos. “There is certainly a long road to recovery ahead, but seeing the rebuilding efforts in person today was truly inspiring. The dedication shown by educators, administrators and local leaders to getting students back in the classroom, and their lives back to normal, was evident at each stop. The U.S. Department of Education will continue to assist them in every way we can.”

The American Federation of Teachers, the 1.7 million-member national teachers union, has been involved in recovery efforts in both Puerto Rico and the Virgin Islands, sending nurses and other health professionals to help, along with more than 100,000 water purifiers and loads of school supplies.

AFT President Randi Weingarten said that she has been calling on DeVos to help with the relief efforts.

“Virgin Islands public school buildings were in terrible condition before hurricanes Irma and Maria struck, and they’re in even worse shape now,” Weingarten said in a statement Wednesday. “Education Secretary Betsy DeVos’ visit must be more than a photo op.”

While in San Juan, Puerto Rico, Secretary DeVos toured a public elementary school and met with local officials including Governor Ricardo Rosselló, Secretary of Education Julia Keleher and K-12 and higher education leaders to discuss the state of the recovery efforts.

The final stop took place at The University of the Virgin Islands with UVI President David Hall.

Secretary DeVos participated in a round table session with Hall, university leadership and students to discuss their needs and the challenges that lay ahead of them in the recovery process, according to federal education officials.

DeVos also visited the Charlotte Amalie High School (CAHS) where she met with the principal and staff.

Gov. Kenneth Mapp also met with DeVos and reportedly discussed “the priority needs of the educational sector,” according to Mapp, including the need to build schools more resistant to major hurricanes — and their aftermath — in the future.

Among the meetings between federal and V.I. senior health officials, Commissioner of Health Dr. Michelle Davis met on Wednesday with Director of the Centers for Disease Control and Prevention (CDC) Dr. Brenda Fitzgerald and Director of the Office for State, Tribal, Local and territorial support Dr. José Montero. Drs. Fitzgerald and Montero met with Department of Health staff, other CDC staff and volunteers, and toured the Herbert Grigg Home for the Aged.

The CDC officials promised to evaluate federal and private resources to support the public health needs of the territory, including technical assistance, training, staff support and supplies.

Meanwhile, nutrition aid continues to flow into the territory with the V.I. Department of Human Services reporting 7,400 applications for the Disaster Supplemental Nutrition Assistance Program (D-SNAP) since the application process opened on Monday.

Assistant Commissioner of the Department of Human Services Evril Powell reported that 2,000 applications were submitted on Monday, 2,500 on Tuesday, and 2,900 on Wednesday. Commissioner Powell expressed hopes that the Food and Nutrition Service of the United States Department of Agriculture will approve an extension for the application period. With only a seven-day window for applications and the number of applications increasing daily, the Department is encouraging Virgin Islanders not to wait until the last minute to apply.

The Virgin Islands Water and Power Authority (WAPA) continues to aim for power restoration to 90 percent of the Territory by Christmas. Mapp thanked WAPA for increasing the crews working in Frederiksted: “My request of the Executive Director to double down on the number of crews is in fact taking place.”

The governor announced that Henry Rohlsen Airport will no longer need to rely on generators as the radar tower on the western end of the island is now receiving power from the grid. Many neighborhoods have been re-energized, including the Fire Department on the north side.

Another 200 linemen will be in the territory by the end of the week, bringing to 705 the number of additional workers helping to restore the power grid.

Federal Coordinating Officer of Federal Emergency Management Agency (FEMA) Region II William Vogel reported normal operations will continue at the Disaster Relief Centers (DRCs) on Friday, although it is a holiday. More than 14,000 people have been served at the DRCs across the territory since they opened on October 8. At least 33,000 Virgin Islanders have registered for assistance.

FEMA has designated $83.7 million towards recovery operations. Of this amount, $33.7 million is in low interest loans from the Small Business Administration for families, homeowners and businesses. Other obligations include $41.6 million in public assistance funds and $8.4 million for temporary housing assistance.

Vogel reported that the U.S. Army Corps of Engineers has installed almost 3,000 blue roofs. FEMA continues to work with Virgin Islands partners to move forward with the Sheltering and Temporary Essential Power (STEP) program; additional information may be forthcoming within the next week.

Mapp urged residents not to turn away Blue Roof program contractors. The Department of Planning and Natural Resources is working with WAPA to allow homes with blue roofs to be energized, on the condition that a licensed electrician inspects the home and certifies that it is safe to do so. The deadline for applying to the Blue Roof program has been extended to November 23. Residents are encouraged to apply for the Blue Roof Program even if they are uncertain about qualifying. Being disqualified for the Blue Roof Program may provide an opportunity to qualify for other forms of support.

Debris clearance continues and approximately 175,000 cubic yards of have been cleared. Immediately following the storms, there was an estimated 1.1 million cubic yards of debris to be removed. The Air Curtain Incinerator Program should start by next week, the government said.

The governor announced that the Community Disaster Loan for the U.S. Virgin Islands has been approved. There are a few more legal processes to complete before the funds can be accessed. The loan will initially support WAPA, Schneider Regional Medical Center, Juan Luis Hospital and Medical Center and the cardiac care unit, and the central government.

Virgin Islanders were encouraged to participate in Veterans Day parades, which will be held on St. Thomas and St. Croix.

Today is an official holiday for non-essential government workers, except for those in the Department of Education. School will be in session on Friday.