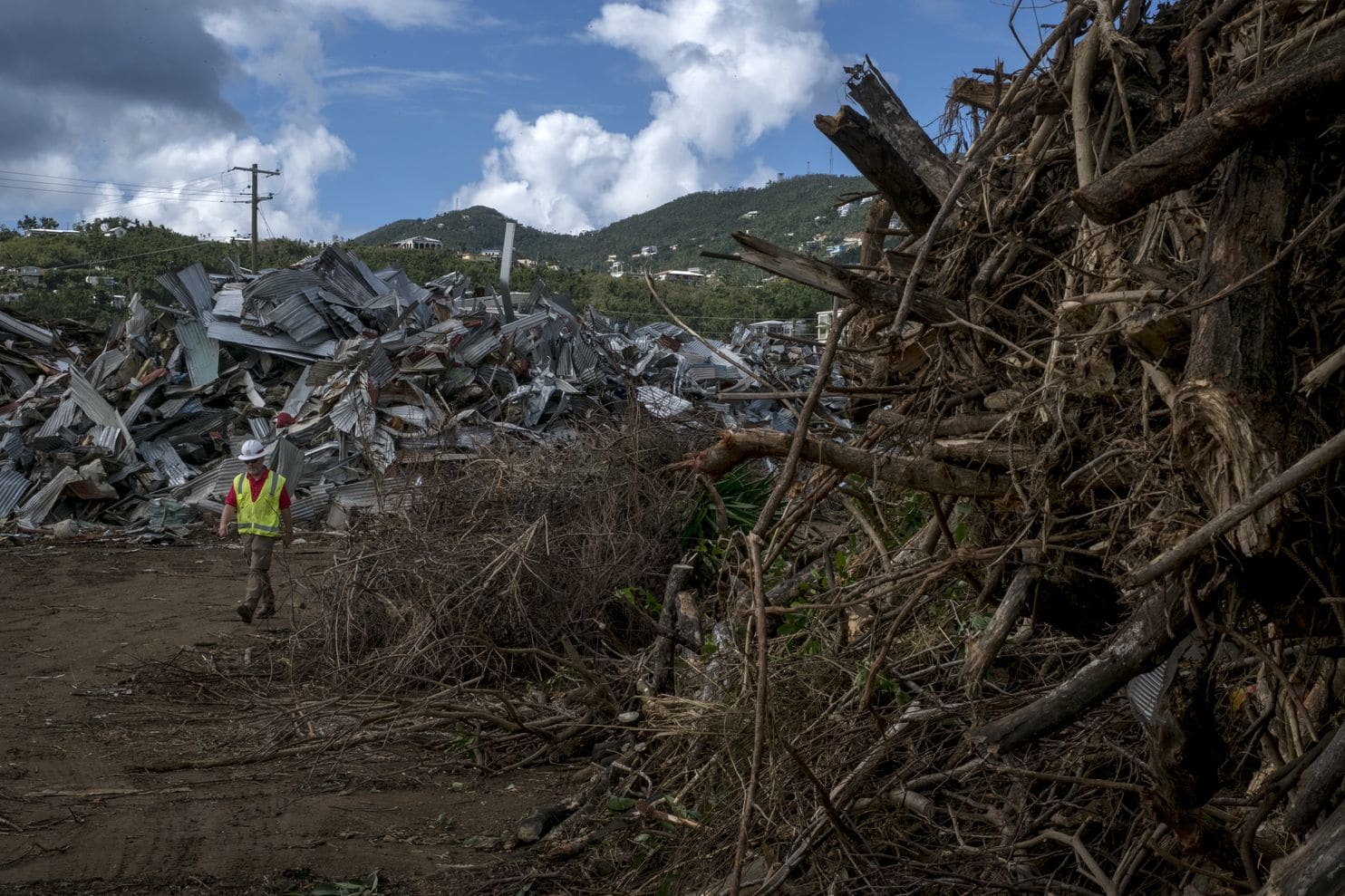 CHARLOTTE AMALIE — Even though he works at a dump, Kenneal Smith used to enjoy the coastal and mountain views offered from his guard shack at St. Thomas’ largest landfill.

But after back-to-back hurricanes pinwheeled across the Capital island in September, Smith now feels like he’s working in a valley because piles of sheared metal roofs, waterlogged appliances and crumpled mango and bay rum trees that have been dropped off here now tower over him.

“You used to actually be able to see over these banks,” Smith said, as he looked up at four-story debris piles lining the entrance to Bovoni landfill. “And the trucks just keep coming.”

Over the past 4 ½ months, the U.S. Army Corps of Engineers and local contractors have collected more than 736,000 cubic yards of debris — the equivalent of 61,000 truckloads — as they rush to clean up St. Thomas, St. John and St. Croix, the territory’s three major islands.

As the mountains of wreckage continue to grow, crowding landfills and littering roadsides, debate has raged over how to get rid of the detritus tarnishing the island’s famous landscape.

A plan to burn the waste was squashed after residents protested over the potential health and environmental effects. Shipping the waste to the U.S. mainland is complicated by the threat of invasive species.

And Haiti, where there is a burgeoning waste-to-energy industry, hasn’t taken it either. Its government likely doesn’t have the manpower to unload the mountains of rubbish in Haitian ports, said Gov. Kenneth Mapp.

Meanwhile, Mapp fears the heaps of debris are not only an eyesore but also a major fire hazard on these islands with limited firefighting resources.

Mapp is demanding that the Army Corps remove all of the debris from the islands, threatening to extend the agency’s formal cleanup mission that is already projected to cost $275 million.

“The biggest question everyone has is where are we taking it?” said Brooks O. Hubbard IV, an Army Corps spokesman for the Virgin Islands recovery effort. “All I can say right now is we are seeking locations where we can take it, either in the continental United States or out of the continental U.S.”

The Army Corps, tasked with overseeing removal of hurricane debris on the Virgin Islands and Puerto Rico, proposed an incineration process similar to one used by the federal government in New York and New Jersey after Hurricane Sandy in 2012. With jungles covering the islands’ mountainous terrain, about 80 percent of the debris left behind by Hurricane Irma and Hurricane Maria consists of uprooted trees, vines and other foliage, according to Army Corps statistics.

Mapp endorsed the Army Corps’ plan, arguing that incineration was the cheapest and most efficient way to get rid of the vegetation. But outcry against the proposal began on St. John, which is surrounded by coral reefs and includes a lush 20-square mile national park.

Within days, residents of St. Thomas and St. Croix joined in to express their opposition through community meetings, a petition drive, letter writing and social media campaigns.

The rebellion was rooted in the territory’s past problems with pollution as well as their heightened concern about President Trump’s skepticism of climate change.

Residents of the U.S. Virgin Islands are American citizens, but they can’t vote in the presidential general election and have no voting representation in Congress.

For much of its history as a U.S. territory, the Virgin Islands has endured repeated environmental hazards, including underground landfill fires and pollution from the oil and rum industries.

Now, after enduring back-to-back Category 5 hurricanes, residents say they have an even better understanding of how fragile their natural environment is. While it took only a few weeks for leaves and flowers to blossom again, most of St. John’s cherished shallow-water coral reefs were damaged during the hurricanes and could take years, if not decades, to fully recover, according to the National Park Service.

“Twenty or 30 years ago, you wouldn’t find such consensus in this community, and we wouldn’t have put up resistance” to burning of the debris, said Emanuel Boyd, 63, a hotel worker on St. John who spoke out against the plan during community meetings. “A community has to feel the pain to begin understanding what is happening around them, and now we feel the pain.” 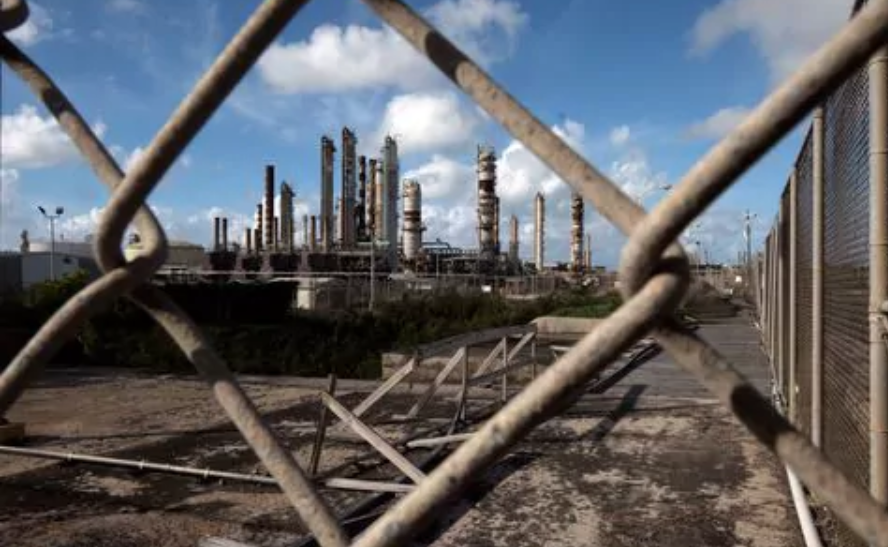 In the mid-1960s, when the tourism industry here was still in its infancy, the Hess Corp. built a hulking oil refinery on the southern beaches of St. Croix. The Hovensa refinery became one of the world’s largest refineries, producing hundreds of thousands of barrels of oil a day.

Sen. Nereida “Nellie” Rivera-O’Reilly, who represents St. Croix and chairs the Commission on Health, Hospitals and Human Services, said people haven’t forgotten how the U.S. government allowed HOVENSA to “self-report” its emissions, even though some residents had complained of becoming “violently ill” from pollution.

In 2011, after decades of local complaints, the Environmental Protection Agency reached a settlement with Hovensa LLC, including a $5.37 million in fines and $700 million in remediation to control air pollution.The refinery closed in 2012.

“After the refinery left, we saw an opportunity for us to reclaim back our air, and we are now more aware, and want to police our environment better than we did in the past,” O’Reilly said.

In response to the protests, the territory’s senate approved legislation barring the burning of hurricane debris. But Mapp, worried the federal government could walk away from the cleanup effort if the territory defied the Army Corps, vetoed the legislation.

In late December, the Senate voted 12 to 2 to override Mapp’s veto.

Still, as Virgin Island residents struggle to clean up from the hurricanes, not all residents are happy that debris can’t be incinerated.

In the shadow of the refinery, Raphael Munchez was recently fishing for snapper, blue runners and baby reef sharks in emerald ocean waters.

Munchez, whose home was damaged during Hurricane Maria, said the burning ban was shortsighted.

The proposal to burn the vegetative debris would have used a process called “air curtain incineration.” Self-contained blowers help accelerate the incineration process while limiting emissions.

When the EPA tested air quality over a six-week period while the incinerators were being used in New York City after Hurricane Sandy, the agency detected unhealthy air quality nearby in four days.

Still, the Army Corps’ plans to deploy the incinerators in the Caribbean have also been met with resistance in Puerto Rico, where the agency estimates the hurricanes left behind nearly 10 times as much debris.

Kayla Stull, the Army Corps debris mission manager, said the agency would have preferred to incinerate the vegetative debris in Puerto Rico, as well, but has been unable to win approval from the territory’s environmental agencies.

The Army Corps is instead grinding vegetative debris in Puerto Rico into mulch and making it available to local property owners.

Local activists want the Army Corps to do the same in the Virgin Islands so local farmers and landscapers can use the vegetative debris to create regenerative compost.

“We want to keep these nutrients in the ground,” said Harith Wickrema, chairman of the Waste Management Authority and president of St. Johns Island Green Living Association. “It’s like if you are hungry, and have food, you wouldn’t throw it out.”

But federal and territorial authorities are skeptical that there is enough space on the islands for stockpiles of mulch. The 624,000 cubic yards of vegetative debris collected thus far would fill 190 Olympic-size swimming pools.

Mapp said he worries the mulch could fuel a wind-driven inferno if it remains here.

As it’s collected, the hurricane debris is separated into three piles — metal, building materials and vegetation.

The Army Corps plans to ship the metal to the U.S. mainland to be sold at scrap yards. After being ground into a fine matter, the building materials also are shipped to landfills on the mainland.

But the fate of the vegetative debris — likely to contain seeds, sprouts and insects that could become invasive species if shipped elsewhere — remains in doubt.

Hubbard, the Army Corps spokesman, said a task force consisting of representatives from the EPA, Agriculture Department, Army Corps and FEMA are now exploring whether the vegetative debris can be safely stored on the mainland.

But Army Corps staffers and contractors are skeptical they even could remove all the debris from the islands before their formal mission is scheduled to end in mid-March.

At a debris drop off location in St. Thomas, contractors were not even sure how the debris piles would be transferred to the dock to be loaded onto barges. They also said far more environmental review was needed before it could be shipped to the mainland. 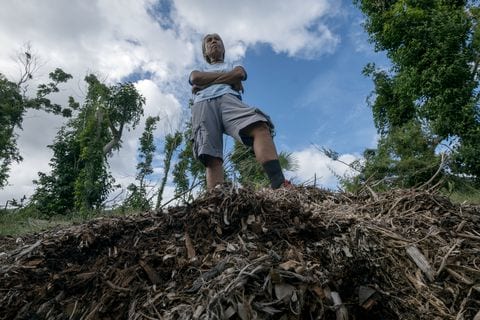 Roller owns of Coral Bay Organic Gardens, which produces much of the island’s fresh produce but was badly damaged during the hurricane.

Standing on her 18-acre property, Roller panned plans for shipping out the debris instead of allowing it to be used as compost. She believes all of St. John’s vegetative debris could be stored on her property, which is wedged between Bordeaux Mountain and the maritime community of Coral Bay.

“They are just making these dumb piles when they should have been chipping it up right away and putting it in a truck to deliver it here right away,” Roller said.

Mapp counters it can take years for mulch to break down into compost, likely requiring territorial employees tasked with frequently turning it so it doesn’t dry out.

“Where would we get the funds to do that?” Mapp asked.

While the governor, federal officials and local environmentalists all wait for a solution, there is one area of agreement: “I don’t foresee us just dumping it into the ocean,” Hubbard said.

SENATE TESTIMONY: A Brief History of Governor's Mansions In Virgin Islands ... Past To Present 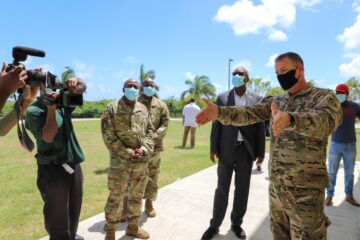 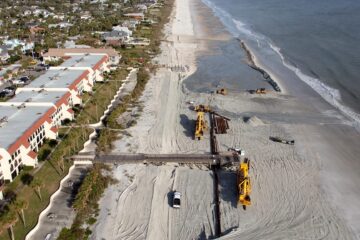 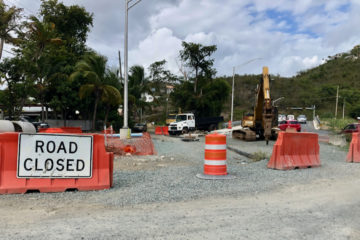 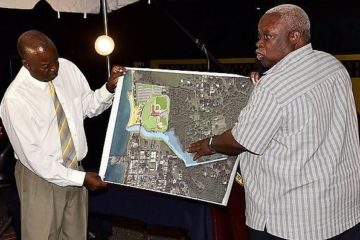