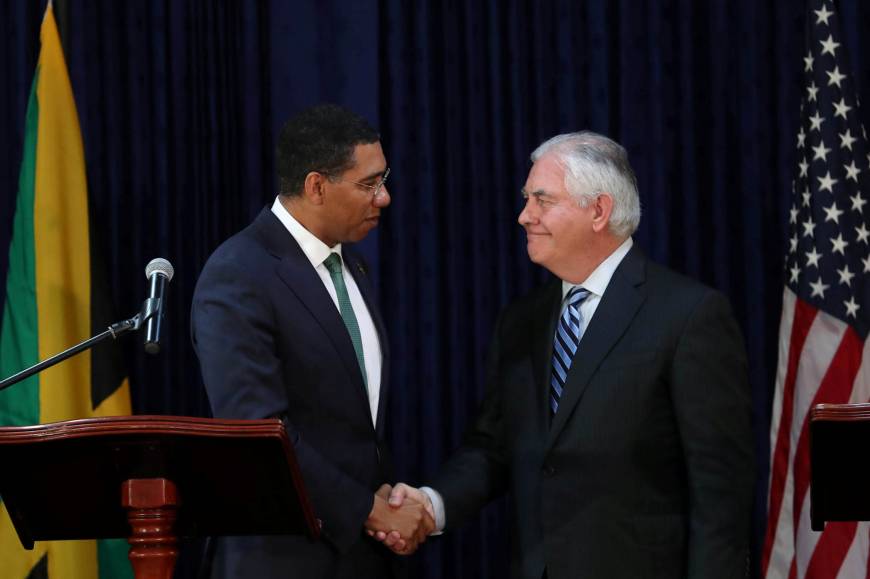 KINGSTON – After a week spent preparing Latin American allies for possible new U.S. oil sanctions against Venezuela, Secretary of State Rex Tillerson visited the Caribbean on Wednesday to discuss the aftermath of such a move.

Many of the island nations in the region depend to one degree or another on cheap oil imports from Venezuela, a fact that the Caracas government has used as a diplomatic bargaining chip.

So Tillerson stopped off in Jamaica on his way home from South America for talks with senior Jamaican officials, including Prime Minister Andrew Holness, on how to manage any crisis.

On the plane flying in to Kingston, Tillerson told reporters that he had agreed with his Mexican and Canadian counterparts to set up a “very small, very focused working group” on oil sanctions.

And it would also — to the concern of Venezuela’s neighbors — hurt ordinary Venezuelans and could be a severe blow to the island economies of the Caribbean, which rely on cheap fuel.

Asked whether U.S. President Donald Trump would green-light an oil ban, Tillerson said: “Well, I don’t want to say it’s a sure thing because I want to do the work.”

But he said he had had productive meetings on Venezuela with the heads of state of Mexico, Argentina, Peru and Colombia.

“And we’ve got one more stop, Kingston, and the reason we are going there is because it would have an effect on the Caribbean countries, that rely on Venezuela. So I want to hear from them as well,” he said.

“So this working group is going to examine these two issues, how to mitigate that and then the president can decide what he wants to do.”