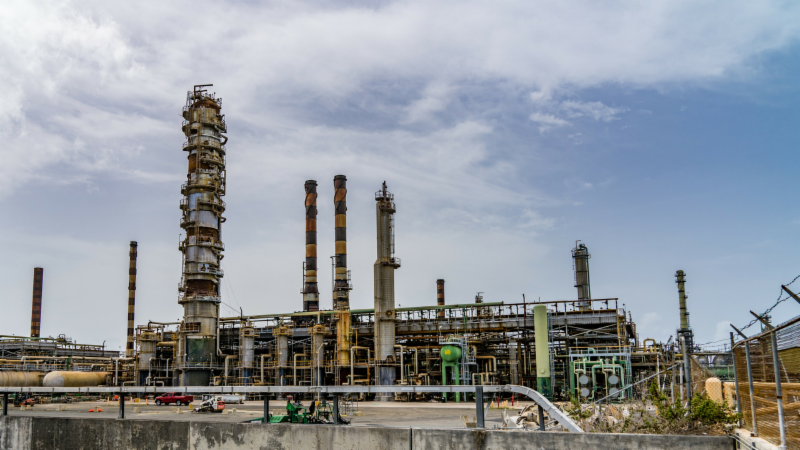 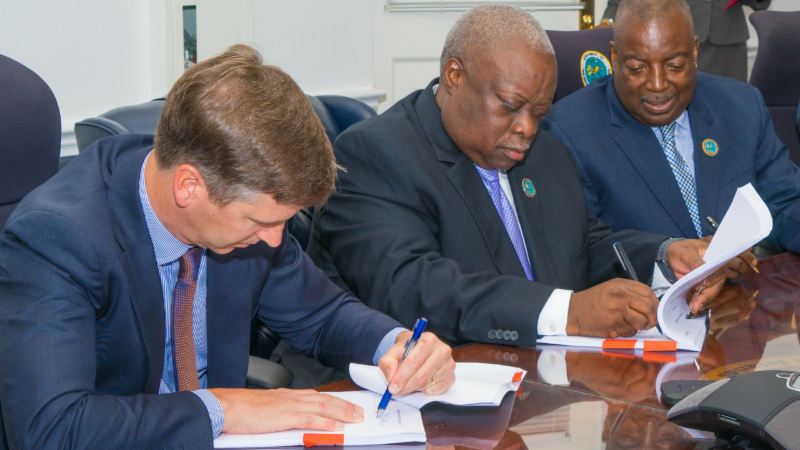 CHRISTIANSTED — Governor Kenneth Mapp announced Monday an agreement which would reopen one of the world’s largest refineries, create hundreds of jobs in the territory and shore up the solvency of the Government Employees Retirement System (GERS).

Governor Mapp said the $1.4 billion agreement was between the Government of the Virgin Islands and ArcLight Capital Partners, LLC, the owners of what had been one of the largest oil refineries in the world, when it was shutdown in 2012. The massive deal includes reopening the refinery portion of the operation, which when restarted, will inject hundreds of millions of dollars into the local economy, generating new tax revenues.

Under the agreement with ArcLight Capital, the owners of what is now called Limetree Bay Terminals, the company will invest approximately $1.4 billion to refurbish the existing refinery located in St. Croix. Over the next 18 months, this will create more than 1,200 local construction jobs.

Once refinery operations commence at the end of 2019, as many as 700 permanent jobs will be created. The new jobs will be in addition to the more than 750 jobs now at the terminal storage facility. The initial refining operations provide for the processing of approximately 200,000 barrels of crude oil feedstock per day.

“This agreement is great news for the people of the Virgin Islands as we continue to grow and expand our economy,” Governor Mapp said, who noted it is tremendous news for the ‘Big Island,’ which felt the full brunt of the shutdown of refining operations in 2012.

He added that the capital investment will not only benefit St. Croix since the revenues from the agreement will shore up the solvency of GERS, but it will also help fund a new 110-room, “upscale lifestyle” hotel, flagged by a major four-star brand on St. Thomas.

Governor Mapp has called the Virgin Islands Legislature into Special Session on Wednesday, July 25, 2018 to consider and ratify the agreement. “This landmark deal to jumpstart our recovery and to pave the road to better times … requires us to move expeditiously if the refinery is to restart on schedule,” said Governor Mapp. “I look forward to working with members of the Legislature and our partners at Limetree Bay to realize its potential for the benefit of all of our people.”

Upon the closing of the transaction, ArcLight Capital will make a $70 million closing payment to the Government of the Virgin Islands. The payment includes $30 million for the purchase from the government of approximately 225 acres of land and 122 homes. This property was acquired as part of the government’s settlement of certain claims against HOVIC, Pedevesa de Venezuela, Hovensa and Hess Oil Corporation. The government will retain the vocational school and more than 350 acres of land it had received in that settlement. The closing payment also includes a $40 million prepayment of taxes by a new refinery entity created by ArcLight Capital to operate the refinery.

Once refinery operations commence and after crediting the $40 million of prepaid taxes, Limetree will make annual payments to the government in lieu of taxes at a base rate of $22.5 million a year. With market adjustments based on the refinery’s performance, this could increase to as much as $70 million per year, but will not fall below $14 million a year.

According to industry experts and consultants Gaffney, Cline & Associates, the government expects to receive more than $600 million over the first 10 years of the restart of the refining operations. This income is in addition to the $11.5 million currently flowing to the government from the oil storage terminal each year.

“For comparison sake, in the over 30 years that Hess Oil operated the refinery on the island of St. Croix, the company paid approximately $330 million in corporate taxes to the government. As you may recall, in 2015 Hess Oil filed suit for the return of (those tax payments),” Governor Mapp pointed out.

The governor explained that his submission to the Legislature provides that 50 percent of the annual revenues from the refining operations go directly to GERS. The anticipated payments over the first 10 years amount to $300 million.

Mapp’s bill also provides for the purchase from GERS of the Havensight Mall and the ground lease of the Port of Sale property. In addition to this purchase, the bill provides that GERS will receive 50 percent of the annual net revenues from the mall and the ground lease. The Public Finance Authority (PFA) will take ownership of these properties, and the Authority’s subsidiary, The West Indian Company (WICO), will fully manage and develop these properties.

From the closing payment and new revenue streams generated by investments made possible by this transaction, the PFA will make a $25 million down payment to GERS and enter into a mortgage with GERS at a rate of 8 percent per annum, which is above the pension system’s required rate of return, for the balance of the agreed purchase price of these assets.

Acquisition of these assets by the PFA and WICO will allow the government to enter into an agreement with the territory’s cruise partners or others to fully develop and leverage these assets to generate a much higher degree of revenue for GERS and the government.

In addition to the $25 million cash injection, the mortgage payments, 50 percent of the mall revenues and half of the annual payments from the refinery, will be dedicated to GERS.

“All together, based on (estimates from) our industry consultants, these measures will generate more than $380 million into GERS over the next 10 years,” said Governor Mapp. He also remarked that actuaries cautioned that these payments and infusion of cash will not save the system, but they will extend its life by an additional five years, “giving all of us, the plan’s sponsor, the plan and the plan’s members, some breathing space to rationally find a permanent solution to restore GERS to solvency.”

“Please note that I have previously submitted a bill to the Senate to increase the government’s contribution to GERS over the next three years as well as increase the contribution of its members whose salaries are higher than $65,000 per year,” Governor Mapp added. “So, these two measures combined provide more than five years of additional solvency of the retirement system.”

The Governor’s submission to the Legislature also provides that out of the closing payment, up to $10 million will also be used as an equity investment in the new 110-room hotel located at Yacht Haven Grande on St. Thomas. This hotel will be the first new hotel built in the territory in decades.

Funds from the closing payment will also be divided up and used to pay $10 million of income tax refunds; $3 million for the operation of the judicial branch for the upcoming fiscal year; $2 million for the relocation and development of a legislative complex on St. Croix; $7 million to the Waste Management Authority to pay outstanding obligations to vendors; $3 million to the St. Croix Capital Improvement Fund, and $4 million for the Paul E. Joseph Stadium. A sum of $2 million will flow to the St. John Capital Improvement Fund and $1 million will be allocated for the reconstruction of the St. John Battery, which was destroyed by Hurricane Irma.

“This landmark agreement did not happen overnight. It is the result of much hard work by the owners of ArcLight Capital and my Administration over the past two years,” Governor Mapp said. “It is the product of complex negotiations with major players in the global oil industry. It required tremendous work with the Trump Administration and the President’s Council of Environmental Quality, the EPA (United States Environmental Protection Agency) and the U.S. Department of Justice. More work remains to be done, but this agreement allows the Virgin Islands to accelerate its recovery, grow its economy, create jobs for its people, propel new startup businesses, as well as support existing businesses and ultimately provide revenues for our government and our retirement system,” he said.

Two years ago, the government entered into an agreement with Limetree Bay Terminals, LLC, a subsidiary of the private equity firm ArcLight Capital, for the operation of the oil storage terminal at Limetree Bay. The 31st Legislature ratified that agreement, and it has proven to be an overwhelming success story. The terminal now employs more than 750 full-time people, more than 80 percent of whom are Virgin Islanders.

To date, the company is paying more than $11 million annually in taxes to the government, has invested approximately $260 million in capital improvements to its facility and is in the final stages of a $100 million capital project, building the single-point mooring buoy that will allow it to handle the world’s largest tankers.

“Limetree has been a good corporate citizen, a good business partner and has donated more than $1 million in charitable and educational contributions. The Limetree Bay terminal has played a critical part in the Territory’s road to economic recovery. We have both worked hard on the restart of the refinery and I want to personally thank Jake Erhard and Evan Schwartz of ArcLight Capital, for doing business with us and continuing to invest in the U.S. Virgin Islands.” The Governor welcomed Robert Haugen, Senior Vice President of Refining at Limetree Bay Terminals, who will lead the refining operation.

ArcLight Capital’s plan anticipates a massive capital investment in a compressed period of time in order to capture a market opportunity in the oil industry. “Timing is of the essence in completing the turnaround and restart of the refinery,” Governor Mapp implored, announcing that during the legislative process, ArcLight will detail its strategy and its schedule to employ more than 1,200 workers during the accelerated construction period. “The objective of the overall strategy is to have refined product from the St. Croix refinery in the market come January 2020,” he reported.

Qualified Virgin Islands residents will be given preference in all hiring. ArcLight Capital will be required, and the local government will assist, to advertise and publicize all job opportunities for local residents. Residents of St. Thomas and St. John, who may be interested in working during the reconstruction of the refinery, will be offered a place to live while working on St. Croix without charge.

Together, the Amended Terminal Operating Agreement and Refinery Operating Agreement may bring an estimated $775 million in revenues to the government over the next 10 years, of which more than $600 million will be new revenues generated entirely by the refinery. Those monies are in addition to the massive economic benefits that will be conferred upon the Territory in general, and St. Croix in particular, by the infusion of $1.4 billion in direct capital investment and the creation of as many as 700 new full-time, permanent jobs.

Jake Erhard, Partner at ArcLight Capital Partners, LLC, thanked Governor Mapp for encouraging the company not to limit its engagement to a terminal-only transaction when they took over the refinery two and a half years ago. “The progress we’re making on the ground with the refinery assets would not have happened if we were left to our devices,” he remarked. “We only wanted to buy the terminal assets, and Governor Mapp and his administration insisted that we include all of the assets including the refining assets into the transaction so we abided and did that.” He said that one of the other salient features of the terminal operating agreement is the framework around the public-private partnership. “Of all the things, that was probably the most gratuitous aspect of that transaction because it’s really proven to be a tremendous benefit for us.” Robert Haugen echoed Erhard’s comments and thanked the government for its support of a large, challenging and exciting project.

Tom Mukamal, Chief Executive Officer of Island Global Yachting, acknowledged the governor and his team’s tenacity which helped make the hotel development a reality. “The financing coupled with $30 million in private funds will see this project move ahead,” he said, describing the urban hotel development as “shovel ready” given the infrastructure that already exists at Yacht Haven Grande and the planning that had been done many years ago.