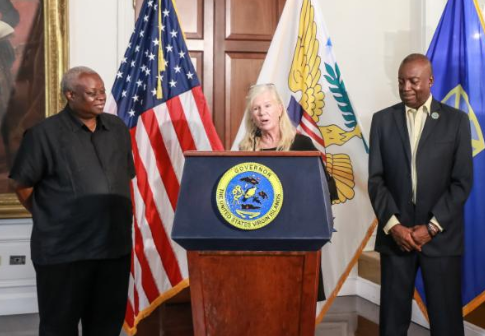 CHRISTIANSTED — Governor Kenneth Mapp said that he and “his administration have received high praise for their handling of the post-hurricane crisis in the territory and their success in the continued rebuilding of the tourism sector.”

At a press conference on Tuesday, Florida-Caribbean Cruise Association (FCCA) President Michele Paige applauded the Virgin Islands’ determination “to get tourism back” and pledged FCCA’s ongoing support for the destination.

“Congratulations to the entire U.S. Virgin Islands. Your resilience and hard work paid off. Even though you suffered and you had 18-hour days working to rebuild for tourism, your efforts have paid off. We stand with you,” she declared, speaking to members of the media at Government House on St. Croix.

Lauding the tireless actions of the Governor, Lieutenant Governor Osbert Potter and Commissioner of Tourism Beverly Nicholson-Doty in the aftermath of Hurricanes Irma and Maria in September 2017, Paige commended Government officials for their timely communication with the FCCA and other partners as part of a comprehensive strategy to get the Virgin Islands back up and running as quickly as possible.

“You did act in unison with the other destinations that were devastated but you were leaders,” said the FCCA President.

“You were the epitome of what a destination should do to rebuild. So, it’s very important for me to congratulate your leaders. You could not have done things better … I can only be proud to be part of this family.”

As testament to the robust manner in which the Virgin Islands has rebounded, Paige disclosed that, in spite of the devastation, the territory’s economic impact per passenger spending has increased by almost 10 percent.

“You went to $165.50 from $150 (in daily passenger spend). That’s a tremendous increase. So, for every passenger ship that comes to the destination, you’re reaching almost $650,000 per vessel in just passenger cruise spending.”

Paige and Chairman of the FCCA Operations Committee, Carlos Torres de Navarra, who serves as the Vice President, Commercial Port Operations at Carnival Cruise Line, painted a positive outlook for the future, given steps which the Government is taking. Calling the introduction of water transportation in Charlotte Amalie “a game changer,” Torres de Navarra predicted this will trigger greater improvement in the tourism offerings and experience.

“You have a great product which is the water and being able to showcase that harbor … and everything that’s to be seen from the water, it’s just amazing what it’s going to do for what people view of St. Thomas,” Torres de Navarra said.  “More importantly, it’s going to help the economic impact.”

Noting the “infrastructural improvements that the governor is showcasing is something we have asked for for two decades,” Paige stressed that “if you can’t move people, they are going to get back on the ship.” In addition, she urged government to capitalize on their most prized asset – Virgin Islanders.

“The people of the Virgin Islands are your secret weapon!” Paige said.

Passengers, she said, want to experience the destination’s lifestyle and culture – “to know what the local customs are, the local dishes are, local art, everything local.”

The Government of the Virgin Islands invited the FCCA’s top brass to visit St. Croix to continue solidifying its relationship with cruise partners. Earlier in the day, the FCCA delegation met with Crucian tour operators and other tourism stakeholders to explore plans to make St. Croix a more appealing destination for both cruise lines and their passengers.

“For St. Croix, the important thing is to introduce yourself for cruise liners … Give us a reason to stop here and be ready because we will be coming,” Torres de Navarra said.