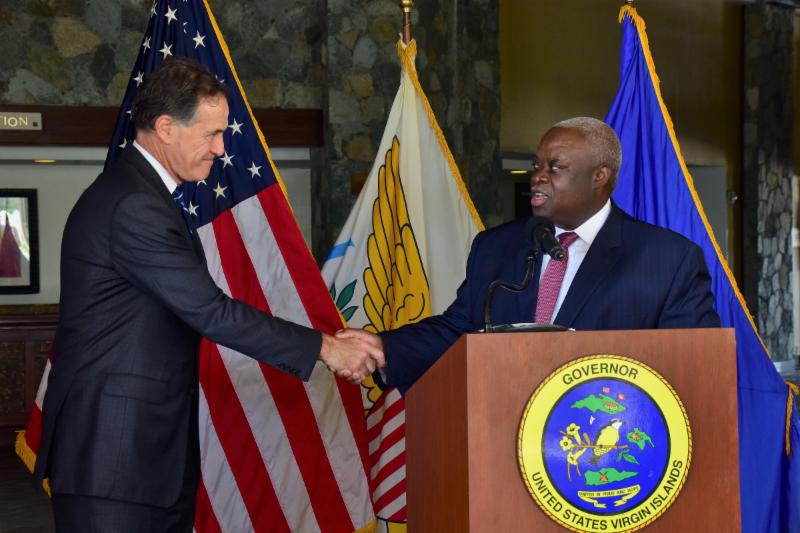 CHARLOTTE AMALIE – In what was described as a “another major milestone” in the territory’s recovery from last year’s devastating hurricanes, Governor Kenneth Mapp said this week that an agreement had been reached to assist in the reopening of Frenchman’s Reef & Morning Star Beach Resort on St. Thomas.

The government has officially entered into a Memorandum of Understanding with the owner of Frenchman’s Reef, DiamondRock Hospitality, to allow the resort and any other Virgin Islands hotel properties to voluntarily opt to impose an Economic Recovery Fee on their own facilities in order to raise money to rebuild or expand. Mapp said that Frenchman’s Reef would be equipped to serve as a shelter in the event of future weather emergencies.

“Large hotels like Frenchman’s Reef are excellent candidates for emergency shelters, because they have robust backup power generation, wastewater treatment, and other services that are critical in protecting people during storms,” Mapp said. “My Administration has agreed to work with its federal partners to seek funding for emergency shelters of this kind.”

With 502 rooms, 30,000 square feet of meeting space, and a premium location overlooking Charlotte Amalie Harbor, Frenchman’s Reef is a large part of the St. Thomas tourism industry, hosting over 270,000 guests in 2016 and contributing more than $100 million to the Virgin Islands’ economy annually. The hotel was badly damaged in the 2017 storms and there had been some question about its ability to reopen given the severity of the damage to its facilities.

“Its importance to our economy cannot be overemphasized,” Mapp said. “Accordingly, my Administration has worked with the owners of Frenchman’s Reef to craft a public-private partnership that will allow the resort to rebuild, renovate, and return to operations better than before.”

Mapp said he was sending down a bill to Senators on Wednesday that will assist all the Territory’s hotels and resorts in their recovery efforts without obligating any Government resources. The legislation allows hotels to raise overnight occupancy taxes up to 20 percent, with anything above the mandated 12.5 percent being returned to the property to help fund and recoup building costs.

Bill Tennis, Executive Vice President of DiamondRock Hospitality, thanked Mapp for his “consistent support” and confirmed the hotel will reopen during the first quarter of 2020. In addition to making the hotel’s buildings more impervious to storms, Dennis anticipates an expansion of the pools and public spaces and upgrading the Morning Star portion of the property to what he described as a “premium” resort.

“When completed this will be a very significant investment by DiamondRock in the territory,” Tennis said. “We are particularly appreciative of Governor Mapp and his team’s efforts to assist the tourism industry by introducing this legislation today.”

Mapp provided an example as to how the new Economic Recovery Fee program will work.

“Imagine a hotel that elects to impose a 5 percent Economic Recovery Fee to help fund renovations to a wing of guestrooms,” he explained. “Imposing the fee will effectively increase its occupancy tax from 12.5 percent to 17.5 percent. Upon collection, the additional 5 percent will be placed in an interest bearing trust account, from which the hotel can withdraw funds to pay for expenses relating to the renovations. The hotel thus obtains a new revenue stream for funding improvements, without taking any existing revenues away from the government.”

The Governor urged Senators to act on the bill.

“With my proposed legislation, hotels will be able to open sooner, so I ask the Legislature for its prompt consideration and support to keep moving our territory forward,” the governor said.

Tourism officials said announcing a reopening date for Frenchman’s Reef sends strong, positive signals to the airlines to increase flights and to meeting planners to consider the Virgin Islands for special events.

“Make no mistake, this is historic for us today,” Virgin Islands Tourism Commissioner Beverly Nicholson-Doty said.

Nicholson-Doty said that the return of the Paradise Jam Basketball Tournament in November as a significant measure of progress in the local hospitality industry.

“Hundreds of players, coaches, support staff, fans and family members are expected to be in the territory for this annual event,” she said.