“On behalf of the people of the Virgin Islands, Lt. Governor Potter and I send our condolences to the entire Bush family, as well as to our fellow Americans, as we mourn the loss of President Bush,” Mapp said. “President Bush was a statesman and a true patriot.”

Mapp said President Bush remains one of our nation’s most accomplished leaders.

“President Bush found great success in the business world, yet he dedicated his life to public service,” Mapp said. “I had the honor of meeting him personally more than once, including on his visit to St. Croix with his wife, the late Barbara Bush, and I remain grateful for the experience.”

“Before being elected as our 41st President he was a decorated Navy combat pilot, successful oil executive, Congressman, United Nations delegate, Republican Party chairman, envoy to China, Director of the Central Intelligence Agency and Vice President of the United States for eight years alongside Ronald Reagan,” Governor Mapp said. “Few can match his experience or his dedication.” Mapp said he would order the Territory’s flags to be flown at half-staff in accordance with the federal directive. The White House also announced Saturday that December 5, 2018 would be recognized as a National Day of Mourning for the late president.
Tags:Governor Kenneth MappPresident George H.W. Bush
Previous post

Dominican Who Tried To Sneak In On St. John Under Cover of Darkness Gets 45 Days 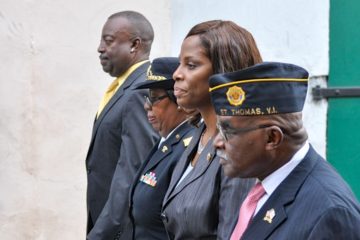