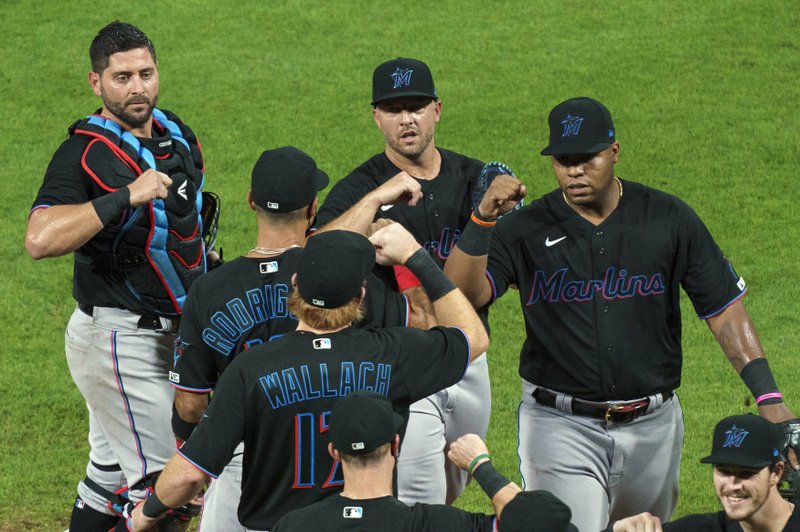 MIAMI — The Miami Marlins, one of the most under-the-radar teams in sports, have been in the news lately.

Lack of respect? Even Rodney Dangerfield would probably get the Marlins’ name wrong. Nonetheless, they’ve become the talk of baseball while coping with a coronavirus outbreak that forced MLB to suspend their season through at least Sunday.

For starters, will other teams be willing to play them? Washington Nationals players voted almost unanimously against making a trip to Miami for three games this weekend, before MLB called off the series.

“The league is on top of that very issue — the safety of teams going into Miami right now,” Klentak said.

If the Marlins are to keep playing, fielding a team will be a challenge. Another Miami player tested positive for the virus, bringing the team’s total to 19 infected players, the Miami Herald and CBS Sports reported today.

With half the team sidelined, rounding up roster replacements will be a patchwork effort. The Marlins’ farm system ranks with the best in baseball, but some of their top prospects aren’t on the 40-man roster, which will make it difficult to promote them to the majors.

The Marlins have been scrambling to acquire players with big league experience. They claimed right-handers Mike Morin and Justin Shafer off waivers and signed free agent infielder Logan Forsythe.

Fauci, the nation’s top infectious disease expert, said the major league season could be in jeopardy. But MLB remains optimistic it can navigate the pandemic, noting that Miami has been the only team with a positive test result since Friday.

The Marlins’ outbreak occurred in Philadelphia, where they remain quarantined. Eventually they’ll return to Miami, one of the nation’s virus hot spots — and now a hot spot regarding the topic of playing games during a pandemic.

Florida Gov. Ron DeSantis was outspoken on that subject in May as he discussed the state’s handling of the virus crisis.

“Professional sports are going to be welcome in Florida,” DeSantis said. “That may not be the case in every other state in this country as we’ve seen. And so what I would tell commissioners of leagues is if you have a team in an area where they just won’t let them operate, we’ll find a place for you here in the state of Florida, because we think it’s important, and we know that it can be done safely.”

Meanwhile, MLB officials have begun investigating the source of the Marlins‘ COVID-19 outbreak, according to USA Today‘s Bob Nightengale.

Ken Rosenthal of The Athletic reported another Marlins player tested positive for the coronavirus, bringing the organization’s number of positive tests to 19 (17 players and two coaches).

Nightengale reported officials are now determining whether the Marlins violated any of the health and safety protocols laid out prior to the start of the regular season.